Preview of Round 4 : Trackrod Forest Stages – 25th September.
The Trackrod Forest Stages, the fourth round of the MRF Tyres BTRDA Rally Series® and third in the Motorsport UK 2021 English Rally Championship in association with Seacon UK, takes competitors on to the North York Moors and features some of the fastest special stages they’ll experience all season. Contenders for both series will be heading for the Yorkshire seaside town of Filey which acts as host to the event on 25th September.

Prior to the start, the MRF Tyres BTRDA Gold Star® Rally Championship is in a particularly tense situation as just two points separate the top three drivers and, with a possible 30 available on each of the three remaining rounds, no-one can afford to put a foot wrong. A win on the recent Woodpecker Stages sees Garry Pearson (Fabia) atop the Gold Star drivers’ table, one point ahead of Elliot Payne (Fiesta), with the roles reversed for their respective co-drivers – Cameron Fair (Payne) leads Niall Burns (Pearson) by a single point. Then George Lepley / Tom Woodburn (Lancer EVOX) are both 3rd, also by a similar margin, while Ian Bainbridge / Will Atkins (Fabia) currently occupy 4th, two points further back but still only four behind the leaders!…
All the above are reaping the benefits of classification as finishers in each of the three events so far but, with another three still to run and every competitor’s four best scores to count, those with one – or even two – DNFs to date can still haul themselves back into contention. Tom Llewellin (Mitsubishi Mirage) was absent from the Woodpecker while the Fiesta of Charlie Payne wasn’t seen until the Scottish Rally, but both have taken good results from the two events they have contested.

2019 BTRDA Bronze Star (1400) Championship winner Callum Black, with Jack Morton directing operations in his Fiesta, started as he hoped to continue – with 2nd place points on the Nicky Grist Stages but, since then, fate has not been kind to him with, firstly, a double puncture and then broken steering putting paid to finishes on either of the last two events. However, albeit with no further room for error (no matter who or what is deemed to be at fault!), the pair can still rescue the situation and gain the required number of scores for a serious tilt at the title. 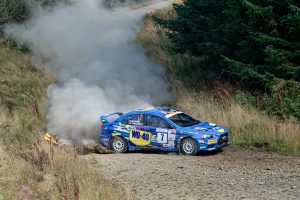 Lepley/Woodburn have, thus far, exerted a vice-like grip on Class B13 in their Lancer but, as above, there are still those in a position to rain on their parade. Richard Hill (Lancer EVO9), Ian Baumgart / Dave Robson (Impreza) and Manxmen Maxx Bradshaw / Liam Whiteley (Lancer EVO3) have also crossed the finish line on three occasions, while Ian Joel / Graeme Wood (Escort Cosworth) and another couple of Lancers in the hands of Matthew Hirst / Declan Dear and Russ Thompson each have ‘previous’ when it comes to class wins at BTRDA Rally Series level.

So far in 2021, the MRF Tyres BTRDA Silver Star® Championship and JORDAN Road Surfacing BTRDA Historic Cup have been inextricably linked in that the top points scorer in one has done likewise in the other! The latest recipient of both accolades is Robert Gough whose Historic spec. Escort Mk2 came up trumps on the Woodpecker Stages.
In Silver Star terms, Ioan Lloyd / Sion Williams (Peugeot 208 R2) were one place and six seconds behind Gough, laying memories of their roll and subsequent DNF on the Scottish Rally to rest, while Owen McMackin’s Escort was right behind them to take 3rd on the day. Paul Street/Ian Jones (Escort Mk2) and Baz Jordan/Arwel Jenkins (Avenger) both recorded their third consecutive finish of the season to maintain 1s

t & 2nd places respectively in both Silver Star and Historic Cup tables.
Setting out to defend their 2019 Silver Star runner-up driver and champion co-driver status, Andy Davison and Tom Murphy have had a nightmare of a season to date. Their hitherto reliable Talbot Sunbeam VXR registered two consecutive DNFs at the start of its campaign and an absence from the Woodpecker now means that the four scores necessary to challenge for a decent end-of-season result are unobtainable. However, the crew take the start of the Trackrod Forest Stages in an attempt to salvage something for their not inconsiderable efforts!
Tony Simpson / Ian Bevan (Fiesta) will be the first BTRDA Rallye R2 Cup contenders to leave the start followed, a couple of minutes later, by the Peugeot 208 of Ioan Lloyd/Sion Williams who will not only be chasing down R2 Cup points but also defending their lead in the BTRDA R2 Junior Cup. However, Rob Wilson, Sam Bilham and Connor Tolson (all Fiestas) will each have other (slightly differing!) ideas on that score…

Fuchs Lubricants BTRDA 1400 Championship front-runners Steve Black/Paul Morris (Suzuki Swift), Richard Jordan/James Gratton-Smith (MG ZR) and Dave & Toby Brick (Nova) will be looking to North Yorkshire as a chance to restore what, in their collective view, is some form of normality to the results after none of them reached the end of SS1 on the Woodpecker Stages! Jordan/Gratton-Smith retain their Championship lead but by a much-reduced margin from the MG ZR of Class 1400C leaders Edward Wain/Noel Murphy and 1400S winners on the Woodpecker, Aaron Rix/Abi Haycock (Escort). They are joined on the Trackrod by Chris Bush’s Corsa for what will be the Glossop driver’s first BTRDA outing of the season.

Following a two-month break after the Nicky Grist Stages, contenders for the Motorsport UK 2021 English Rally Championship in association with Seacon UK are called to arms for the second time in three weeks. With two maximum scores to their credit, George Lepley (Lancer EVOX) and Ioan Lloyd (Peugeot 208) are the joint leaders, with Garry Pearson (Fabia) and Owen McMackin (Escort) equal 3rd, two points behind, and then Elliot Payne (Fiesta), Paul Street (Escort Mk2) and Jonathan Jones (Fiesta R2) a similar margin back.
With such a closely fought battle, it’s quite (very!) likely that good performances in Yorkshire will bring other names to the fore but, with the cancellation of the Wyedean Stages Rally, originally scheduled for next month, we’ll have to wait until the Grizedale Stages in early December, to see just who comes away with the title!…
Prospective spectators should consult www.rallyyorkshire.co.uk for event information.