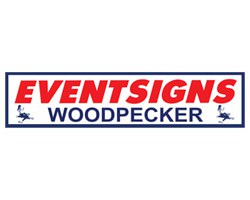 Preview of Round 6:
The sixth round of the 2022 MRF Tyres BTRDA Rally Series, the Phil Price Memorial Woodpecker Stages, returns to its traditional base at Ludlow Racecourse on 3rd September for the first time since 2019 and what is one of the most popular forest events in the calendar has attracted a total entry of nearly 170 cars!

After a brief summer break, the battle for the MRF Tyres BTRDA Gold Star® Championship resumes with the ultra-consistent (5 starts > 5 finishes) Mitsubishi Lancer of Richard Hill / Pat Cooper currently in pole position. To date, the Fiestas of Elliot Payne / Patrick Walsh and Matthew Hirst / Declan Dear have two wins apiece, while Stephen Petch / Michael Wilkinson were victorious on the opening round of the season in theirs. 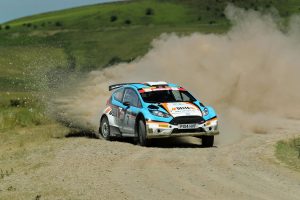 Following an indiscretion on the Nicky Grist Stages which cost them a finish, erstwhile series leaders Perry Gardener / Jack Bowen’s Fiesta R5 has been returned to the shape originally intended by the designers at Ford and they’ll tackle their ‘home’ event (Perry lives in Ludlow) in an attempt to reassert their supremacy. Joining them for the first time this year will be the BTRDA Rally Series’ 200th registration and 2017 Gold Star runner-up, Callum Black, who has 2015 MSA Asphalt Champion Co-driver Jack Morton for company in his MRF Tyres-sponsored Fiesta Rally2.

As far as Class B13 is concerned, while Hill and Cooper currently hold the upper hand, this particular skirmish certainly isn’t over yet! Class leaders until a big accident on the Kielder Forest Rally in June temporarily halted their progress, Russ Thompson / Steve Link (Lancer EVO9) return to join similarly-mounted Darren Craig / Harry Stubbs, Pat Naylor / Ian Lawrence, Rob Wilson / Richard Crozier and winner last time out James Giddings who, from varying distances in arrears, all have one common aim!…

Although they’ve only contested two events so far, Michael McDaid / Declan Casey (Escort RS1800) have claimed maximum Silver Star and Jordan Road Surfacing BTRDA Historic Cup points on both occasions. They’ll be on parade in Ludlow and, based on past performance, could significantly improve their standing in both categories! While, even now, it would be a brave man to bet against Inglis / Chisholm’s success in this year’s Historic Cup, the presence of the likes of Alex Waterman / Glyn Thomas (Datsun 1600SSS) and Jonathan Brace / Paul Spooner (Escort) could well serve to liven up the proceedings! 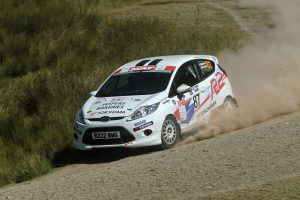 Although Billy Grew {pictured left] has already made sure that the BTRDA Rallye R2 Junior Cup will be residing in Stafford for the next twelve months, the fate of the BTRDA Rallye R2 Cup, itself, is far less certain. As mentioned, Jones / Rogers lead the charge but such is the nature of the competition that, on paper at least, any one of the top seven drivers could claim the trophy. Four different winners from the five events so far (Tony Simpson / Ian Bevan are the only crew with two maximums to their credit) leave everything to play for – and no doubt it will be!… 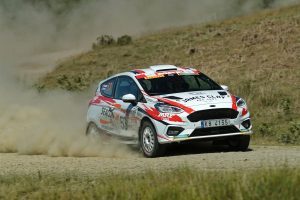 With the MRF Tyres BTRDA Rally First Cup already secured, Lewis Hooper’s grip on the Fuchs Lubricants BTRDA Bronze Star Championship in his Nissan Micra [see image below] is such that, whatever happens on the Woodpecker Stages, his position at the top of the table won’t alter. 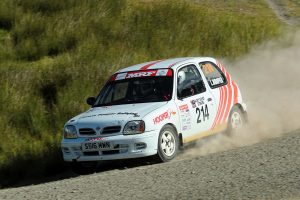 However, that doesn’t mean to say that his work is done. Richard Garnett / Stefan Arndt and Ed James / Charlie Mason (both Micras) are his nearest rivals but, with three events to go, a possible 90 points are still to be claimed which, at the risk of stating the obvious, could significantly alter the look of the leaderboard when it matters most!

Pete Gorst / Mark Twiname’s run of three consecutive maximums came to an abrupt halt on the Nicky Grist Stages when, well on their way to a fourth, their Nova left the road on the final stage. Although no threat in terms of outright Championship victory, the regulars are joined by 2021 Bronze Star Champion Steve Black (Suzuki Swift) and former front-runners Dave & Freddy Brick (Nova) whose farm overlooks Ludlow Racecourse!….

Having been standing at ease since the Kielder Forest Rally in mid-June, contenders for the Motorsport UK English Rally Championship, in association with Seacon UK, report for duty on the Woodpecker Stages once more. Following the first couple of rounds, Nick Dobson (Escort Mk2) has established a slender one-point lead in the series but, with four events to go, the Ilkley driver knows he will have his work cut out to maintain station.

Dobson’s nearest rival David Crossen (Escort) is absent on this occasion which turns the spotlight on to Richard Hill (Lancer EVO9) and former English Rally Champion Ian Joel (Escort Cosworth). However, in the class-based series, the competition will be very close and, literally, anything can happen between now and the beginning of December.

SPECTATORS : The first car leaves Ludlow Racecourse at 8.30am on the Saturday morning and full details can be found at www.woodpecker-rally.co.uk