Following the MSA’s relaxation of the rules in respect of the running order on rallies, the Eventsigns Woodpecker Stages, the penultimate round of the JORDAN Road Surfacing BTRDA Rally Series®, will see all the two-wheel drive cars in the entry traversing the stages first, in reverse order, before the four-wheel drive element leave the start ‘in the order of anticipated performance’. In this way it’s hoped that, over time, the numbers of lower powered cars that have dramatically declined in recent years, will begin to increase once more. Whether we ever return to the halcyon days of up to 60 1400cc cars battling it out in the forests remains to be seen but, in the meantime, as this season draws towards its conclusion, those 140 crews setting off from Ludlow Racecourse will need to give 100% concentration to the task in hand!

Having been victorious on three of the five Championship rounds that have taken place so far, and finished runners-up on a fourth, it’ll come as no surprise to learn that Matt Edwards/Darren Garrod lead the coveted JORDAN Road Surfacing BTRDA Gold Star® Rally Championship in their Fiesta. With just the Woodpecker and Trackrod Forest Stages, which runs in the North Yorkshire forests to go, the North Walians require one more good result and the title will be theirs. However, as we all know, there’s many a slip, such that the ‘fat lady’ hasn’t even begun practising her scales yet!…

Fiestas are also currently the car of choice for many of those hoping to rain on Edwards/Garrod’s parade and include Luke Francis/John H Roberts and the defending Gold Star Champions – and 2016 Woodpecker winners – Stephen Petch/Michael Wilkinson. Then 2008 Gold Star Champion Hugh Hunter, accompanied by Manxman Rob Fagg, Sacha Kakad/Jamie Edwards and Ilminster husband-and-wife Martyn & Dawn England will all be hoping for a slice of the action as well! 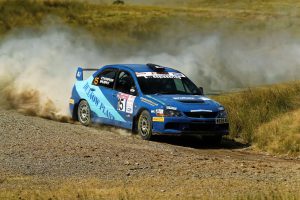 <  Russ Thompson/Andy Murphy have already put this year’s BTRDA Production Cup out of the reach of their pursuers. Four category wins and a second in their Group NR4 Mitsubishi Lancer have ensured that the best that former champions Pat Naylor/Ian Lawrence can hope for is runners-up spot, but that isn’t safe yet either!..

Contenders for the MRF Fiesta ST Trophy, who also qualify for Group N but whose two-wheel drive cars will be running in the first section of the entry, include James Giddings, Mat Tordoff and Zak Hughes, each of whom are currently holding podium places. Meanwhile, teenager Ewan Tindall, whose entry into the series was necessarily delayed until he passed his driving test, has already shown the opposition a clean pair of heels on one occasion and is well placed to considerably improve his overall standing by the end of the season.

The JORDAN Road Surfacing BTRDA Silver Star® Championship has seen different winners on each of the five rounds so far. Most recently it was Max Utting/Mike Ainsworth (Fiesta ST Max), but consistency sees George Lepley/Tom Woodburn’s R2 version leading at present.  2018 heralded the inaugural BTRDA Rallye R2 Cup and, back in the spring, it was announced that the leaders at the conclusion of the Woodpecker would receive a free entry to Wales Rally GB National through the ‘Road to Wales’ scheme. However, George & Tom haven’t had to wait that long to claim their prize – their total domination of the R2 Cup has seen them run out winners on all five events to date, leaving the opposition trailing in their wake! They will leave Ludlow Racecourse a minute behind Utting/Ainsworth as they attempt to make it six out of six! 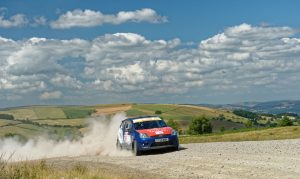 Following an aberration on the Welshpool-based Plains Rally in May which saw their Escort Mk2 failing to reach the finish, Ernie Graham/Robin Kellard returned to their winning ways next time out, on the Carlisle Stages, in pursuit of victory in the BTRDA Historic Cup. Their nearest challengers are series sponsor Barry Jordan and co-driver Paul Wakely in the former’s Hillman Avenger, while Tom Coughtrie’s Mitsubishi Galant VR4 has already made sure of the newly-instigated Class H4.

As mentioned above, the BTRDA 1400 and BTRDA Rally First Championships are not currently attracting the numbers they once were. However, the commitment from those who are competing in such vehicles is no less formidable, such that Chris Powell’s Talbot Sunbeam leads the Nova of Dave Brick by a single point as they 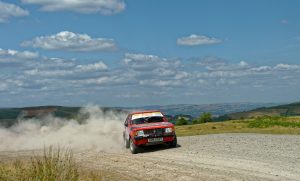 head for the Woodpecker Stages. The Brick family farm overlooks Ludlow Racecourse and, consequently, there’ll be no worries in regard to getting stuck in traffic on the way to the start! What he and Chris Powell will need to concern themselves with, however, is the presence of Kieran Darrington (Corsa) who, after several seasons away from the sport, has removed any doubts as to his ‘match fitness’ with a string of good results, and Tommi Meadows – son of 2000 BTRDA Gold Star Champion Martin – whose Ka came up trumps in Carlisle.

Team-mates Matt Baddeley and Guy Butler continue their friendly (we hope!) rivalry for BTRDA Rally First Championship honours on the Woodpecker Stages in their identical Toyota Corolla Sports. Prior to the start, Matt leads Guy by one point but, with up to 20 on offer on each event, that could easily have changed by close of play…

So, whatever the outside temperature on 1st September, we can guarantee that the pace will be very hot! There’s a lot at stake and, certainly as far as this season is concerned, time is running out for those with designs on the various BTRDA titles!…    The first car leaves Ludlow Racecourse at 8.30am and is due to finish the event at around 4.40pm.