Sixty & Worcestershire Motor Club, organisers of the Eventsigns Woodpecker Stages, the penultimate round of the 2019 JORDAN Road Surfacing BTRDA Rally Series®, has amassed a superb entry of 160 crews, all of whom will be making a beeline for Ludlow Racecourse at the end of the month! One crew is missing from the list, however – Euan Thorburn and Paul Beaton have won all five of the BTRDA Rally Series rounds so far this year, such that they were confirmed as JORDAN Road Surfacing BTRDA Gold Star® Rally Champions following the Nicky Grist Stages in July.  (Subsequently they were also crowned 2019 Scottish Rally Championship winners).  So, who’ll take their place at the top of the leader board this time?

2016 Woodpecker Stages winners, Stephen Petch/Michael Wilkinson have recovered from a dreadful start to the season, posting two 2nd places and one 3rd in recent times, but must now produce similar results on both the remaining events if their Fiesta is to end its campaign with a podium finish in the JORDAN Road Surfacing BTRDA Gold Star® Rally Championship. Charlie Payne/Carl Williamson (Fiesta R5), the 2016 Gold Star Champions, were missing from the Ludlow line-up twelve months ago. However, returning once again, they’ll be looking to improve on the 6th place finish they achieved in 2017. Ian Bainbridge has forsaken his recalcitrant Impreza and will be out in a Skoda Fabia R5, while Sam Bilham/Patrick Walsh’s hard work acclimatising themselves to their Fiesta is beginning to pay dividends. 3rd overall last time out sees them moving up the table but, in a situation similar to that of Petch/Wilkinson, they’ve already posted two DNFs and no longer have the luxury of being able to drop a score.

Class B13 has been somewhat akin to a roller-coaster ride for most of its contestants but, having thus far avoided all the pitfalls that have taken turns to claim their rivals, Richard Sykes/Simon Taylor (Lancer EVO9) lead the table as they arrive in Ludlow. However, with dropped scores now coming into play, they can only improve on those already on the board, whereas the likes of Ian Joel/Graeme Wood (Escort Cosworth), Matthew Hirst/Declan Dear (EVO9) and Richard Hill/Steffan Evans (Impreza) can (must?…) count everything they earn on the Woodpecker towards their final tallies.  Not exactly a ‘wild card’ but, having clinched both the BTRDA Silver Star® Championship & Historic Cup titles with two rounds to spare, George Lepley now joins the B13 brigade in an EVO X. OK, he’s not in a position to challenge for end-of-season class honours but, having taken to everything else he’s driven like a duck to water, the ‘regulars’ better be on their mettle if they’re not to find themselves upstaged!

Scott Faulkner/Gareth Parry’s grip on the BTRDA Production Cup slipped a bit after their Lancer EVO9 failed to finish the Nicky Grist Stages. They still lead the category but have fallen back into the clutches of the similar cars of Pat Naylor/Ian Lawrence and Russ Thompson/Andy Murphy. All three crews have posted one retirement to date and six points currently separate first from third. A glance at the calendar will tell you that it’s not 5th November but, nevertheless, expect some fireworks before this one reaches its conclusion!
Pat Naylor/Ian Lawrence (Lancer EVO9) on their way to winning the Production Cup on the 2018 Woodpecker.

Having taken four consecutive maximum scores, Zak Hughes/Tom Wood’s inexorable march towards this year’s MRF Fiesta ST Trophy suffered a setback on the Nicky Grist Stages when they were sidelined by a broken bottom arm. So, they still need one more good score and have two opportunities to claim it – if they don’t, they’ll leave the door open for either Scot Bobby Mitchell or Manxman Stephen Ormond-Smith….

All the two-wheel drive cars in the Woodpecker Stages entry are running at the front of the field in reverse order of seeding.  As previously discussed, George Lepley is the Silver Star Champion for the second consecutive year, but second and third places remain to be decided. Andy Davison/Tom Murphy (Talbot Sunbeam VXR), who retired from the season-opening Cambrian 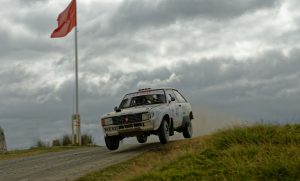 Rally, came out on top last time – more of the same on the Woodpecker would do their chances a power of good as the two crews ahead of them in the table – Perry Gardener/Keaton Williams and Tony Simpson/Ian Bevan (both R2 Fiestas) – already have the obligatory five scores….

National section of Wales Rally GB – but there is still work to be done in BTRDA Silver Star Championship terms and anyway, as they live in Ludlow, it’d be rude not to show their faces at the Racecourse at some point over the weekend!….

Having been absent as a competitor for much of the season, BTRDA Rally Series sponsor Baz Jordan returns in his Avenger – you know, the one that George Lepley has used to win all and sundry!…’ – and, with the help of Arwel Jenkins, will be joining the Escorts of Steve Ward, Ben Friend and Jonathan Brace chasing BTRDA Historic Cup points.
While not in the hunt for BTRDA Championship points, it’s interesting to note that five-times Woodpecker Stages winner (1988 / 91 / 92 / 93 / 96) Richard Gough, who has retained his ex Rothmans Ford Escort Mk2 since those heady days all that time ago, will be taking part once again!

And so to the Fuchs Lubricants BTRDA 1400 Championship (BTRDA Bronze Star) which, to put it mildly, is finely poised! The top four drivers in the table – Chris Powell (Talbot Sunbeam), Steve Black (Suzuki Swift), Dominic Hodge (Nissan Micra) & Noel Lappin (Ford Escort Mk2) – have all maintained 100% finishing records to date, while 5th-placed Callum Black (MG ZR)  missed the first round but has since scored three maximums and a third…. Indeed, he can count himself very lucky to have finished the last round as, by the time he and Michael Gilbey arrived back in Builth Wells, the oil pressure warning light had been glowing for far too long!… All five cars will leave Ludlow Racecourse in pristine condition but, as to the order in which they return, your guess is as good as anyone else’s!… 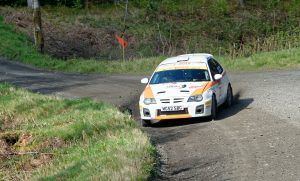 Wesley Gilford/Mark Townson’s BTRDA Rally First Championship specification Fiesta ST will have the honour of leading the contestants away from the start followed, one minute later, by the MG ZR of series leader Joseph Keen. Having had a season to forget until recently, Sam & Liam Johnson will be hoping that their Seat Arosa’s maximum score on the Nicky Grist Stages wasn’t a flash in the pan.

The MAXXIS Motorsport UK English Rally Championship continues on the Woodpecker Stages…. and George Lepley will be hoping to continue to lead it! The class-based series is a very close-fought affair – currently, a mere five points separate first from tenth drivers! Breathing down Lepley’s neck, Callum Black’s MG ZR has a slender one-point advantage over Perry Gardener’s Fiesta, Andy Davison’s Sunbeam and the Escort Mk2 of Tim Phelps.
Pretenders to the English Championship crown have three more events, including the Woodpecker, Trackrod Forest Rally and the Wyedean Stages, on which to assert themselves as they strive to add a Motorsport UK-backed Championship title to their rallying CVs. Good luck to them all!…

The first car is due to leave the start of the Eventsigns Woodpecker Stages at 08.31 on the Saturday morning and, following the completion of five special stages – two in Radnor, two in Haye Park and one in Hopton – totalling 44 miles, returns to the Racecourse at 16.45.