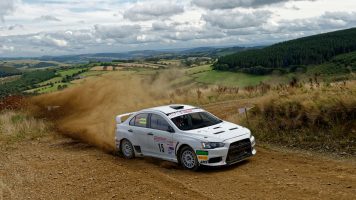 ALL CHANGE for 2020 – BUT SERIOUS FUN GUARANTEED…!

The British Trial & Rally Drivers’ Association (BTRDA), promoters of the BTRDA Rally Series and the Motorsport UK English Rally Championship, is delighted to announce that both will benefit from new headline sponsors in 2020.

The 2020 MRF Tyres BTRDA Rally Series heralds the first of a three-year deal which begins with the Llandudno-based Cambrian Rally on 8th February.
Jerry Freeman of Service & Sport, the UK distributors of MRF Tyres, commented “MRF are excited and very proud to be associated with the BTRDA, we see it as a big step forward in our development in Europe. There’s no doubt that the BTRDA is the most popular Rally Series in the UK and is home from home and where I started competing. All of us in MRF are really looking forward to working with the BTRDA over the next few years.”

Seven of the UK’s top National ‘B’ forest stage rallies are included in the calendar which concludes on the North York Moors with the Trackrod Forest Stages at the end of September. New for 2020 will be the 75th running of the Scottish Rally, based at Lockerbie just off the M74. The final points table will be based on a competitor’s best 5 scores, which provides some flexibility to fit around family or business commitments.
2020 MRF Tyres BTRDA Rally Series calendar* (subject to final Motorsport UK confirmation)

The MRF Tyres BTRDA Rally Series will continue to be open to all stage rally cars and will include a broad spread of categories and competition classes so there is something for everyone. In addition to the Gold Star, Silver Star and Bronze Star (1400) championships, the 2020 BTRDA Rally Series will include BTRDA Rally First, BTRDA Historic Cup, Production Cup, Rallye R2 Cup and Fiesta ST Trophy.
Meanwhile, regular BTRDA Rallye R2 Cup Competitor and long-term supporter of the BTRDA, Tony Simpson, will be sponsoring the Motorsport UK 2020 English Rally Championship through his International Freight Forwarding company Seacon UK Ltd. The Seacon UK Motorsport UK 2020 English Rally Championship will consist of six gravel events and begins in Cumbria with the Malcolm Wilson Rally on 14th March.

Further information about both Championships will be announced in the next few weeks.