BACK TO THE FRONT….!

The ATL Carlisle Stages is the first event in the 2018 JORDAN Road Surfacing BTRDA Rally Series to take advantage of the MSA’s recent relaxation of their regulations in relation to permitted running order. In this instance, it not only allows contenders for the BTRDA 1400 and BTRDA Rally First Championships and the older Historic Rally cars to run at the head of the field, but also in reverse seeded order.

As this is also a joint event with the British Historic Rally Championship it could be Paul Mankin / Desmond Bell in a Lotus Cortina who lead the event away from the start at 8.00am on Saturday 9th June.  Kieran Darrington/Adrian Cooper and Stuart Spyer/Pete Williams will be relying on their respective Corsas to carry them to the finish of the Carlisle Stages.  Having sampled an R2 Fiesta last time out on the Plains Rally, Tommi Meadows/Emma Morrison revert to their 1400cc Ford Ka once again whilst Richard Cole (Ford Escort) will be travelling all the way from South Devon to compete on the event.  Meanwhile, Chris Powell/Jim Lewis (Talbot Sunbeam) and Dave & Toby Brick (Corsa) who both have maximum scores to their credit already, will be looking to outdo each other and add another one to their accounts.     Main Photo is Dave & Toby Brick (Corsa) on the 2018 Rallynuts Stages.

Following the initial group of competitors, the event returns to ‘conventional’ seeding for JORDAN Road Surfacing Gold Star® Championship contenders. Matt Edwards (a former BTRDA 1400 Champion in 2010) and Darren Garrod (Fiesta R5) have emerged victorious from the previous two encounters this year and will now be chasing a hat-trick. However, those out to see that there’s a change at the top of the leader board on this occasion include Luke Francis/John Roberts (Fiesta WRC) and current Gold Star Championship leaders Paul Bird/Jack Morton who are keeping the faith with their Focus WRC. Bird lives in nearby Penrith and will be very much hoping that local knowledge plays a part in the outcome! 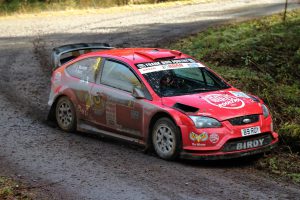 Defending Gold Star Champions Stephen Petch/Michael Wilkinson (Fiesta WRC) are keeping up the pressure on Bird/Morton but can’t afford to make any mistakes as they continue their quest for back-to-back titles. A welcome return for Mick O’Brien accompanied by Rob Fagg (Fiesta R5+) are next away, followed by Sacha Kakad/James Aldridge (Fiesta R5) and the 2016 BTRDA Gold Star Champion Charlie Payne in another Fiesta who has Dale Bowen for company this time.

Late arrivals to the party, Richard Hill/Steffan Evans (Impreza) swept all before them in Class B13 on their first outing, the Plains Rally, finishing in front of the Lancer EVO9 of Matthew Hirst/Declan Dear.  Ian Joel/Graeme Wood put their Escort Cosworth off the road in Wales and now need to make up the lost ground. They still have plenty of time but a good result in Carlisle would be hugely satisfying….

Russ Thompson/Andy Murphy have grabbed this year’s BTRDA Production Cup by the scruff of the neck, taking their Lancer EVO9 to maximum points scores on each of the three rounds so far. Following Tom Naughton’s big accident on the Plains a month ago, his enforced absence leaves Thompson to concentrate on keeping fellow Lancer devotees Pat Naylor/Ian Lawrence at a safe distance. However, rest assured that the Midlands crew will have other ideas on the subject!…

Starting the season in such good form in their quest for BTRDA Historic Cup honours, Ernie Graham/Robin Kellard (Escort) and Tom Coughtrie (Mitsubishi Galant VR4) will have been somewhat underwhelmed by the Plains Rally which saw them both listed among the retirements. Even so, in spite of the setback, they start the Carlisle Stages leading their respective categories and will be looking for another opportunity to stamp their authority on the proceedings.

In BTRDA terms, the inaugural Rallye R2 Cup is proving to be a welcome addition to the fold as eleven drivers have already scored points. Be that as it may, George Lepley/Tom Woodburn have ignored all the others, instead treating the category as if it was their own!  Three maximum scores from three events unsurprisingly sees their Fiesta leading the table as they head off up the M6 to the start of the Carlisle Stages. Will Graham/Steven Davey, in another Fiesta, occupy 2nd place and, in the absence of Jack Leese as he recuperates following his major off on the Plains, Bob Vardy/Keaton Williams are next.  Zak Hughes/Tom Wood lead the MRF Fiesta ST Trophy runners, followed some 10 minutes later by James Giddings/Sion Cunniff and Kalvin Green/Rhys Stoneman. 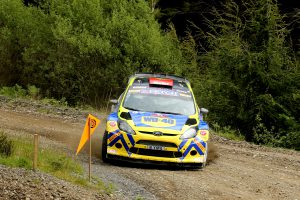 the unfortunate cancellation of the Malcolm Wilson Rally back in March due to the attentions of the ‘Beast from the East’, the ATL Carlisle Stages hosts the rescheduled start of the 2018 MAXXIS MSA English Rally Championship and we’re now looking at a five-round championship, with everyone’s four best scores to count.. Stephen Petch/Michael Wilkinson (Fiesta) managed to hold off the attentions of Pat Naylor/Ian Lawrence (Lancer EVO9) to take last year’s title but, as a class-based series, it’s perfectly possible for the eventual winners to come from any one of the eight capacity classes.

Starting in Carlisle for the ATL Carlisle Stages, the action in an all-gravel format then moves to the Quinton Motor Club promoted Nicky Grist Stages six weeks later. After a similar gap, the Woodpecker Stages will welcome contenders to Ludlow Racecourse for some of the famous Marches special stages. The North York Moors play host to the penultimate round, the Trackrod Forest Rally, at the end of September before the finale, a welcome return to the Wyedean Stages, in the picturesque Forest of Dean on 10th November.

So, this could be a second bite at the cherry so to speak, especially for those that have had a ‘difficult start to the JORDAN Road Surfacing BTRDA Rally Series.     NB: The MAXXIS MSA English Rally Championship registration is all part of the 2018 BTRDA Rally Series and BTRDA membership package.

All participating vehicles must comply with the current MSA Safety & Technical Regulations for Special Stage Rallies but then the Championship will be split into 8 championship classes with the scoring system reflecting achievement against other competitors in the same class. Let the fun begin!…

The ATL Carlisle Stages is based at the premises of H & H Auctions in Carlisle, from where the first car leaves at 8.00am on the Saturday morning. Five challenging stages later, the cars begin appearing back there for the finish from 3.10pm.