Preview of Round 7:
As the MRF Tyres BTRDA Rally Series moves towards its finale, Filey plays host to the penultimate encounter, the Trackrod Forest Stages, on 24th September and, following victory last time out on the Woodpecker, Callum Black (featured image) will lead contenders away from the start in his black liveried Fiesta Rally2. Due to his absence from a number of the earlier rounds, he’s not personally involved in the battle for MRF Tyres BTRDA Gold Star Rally Championship glory but, for those who are, it now gets serious as dropped scores come into play.

Matthew Hirst / Declan Dear (Fiesta R5) are next but, while they have already won two rounds outright, a ‘did-not-start’ and a retirement leave them with no room for error between now and the 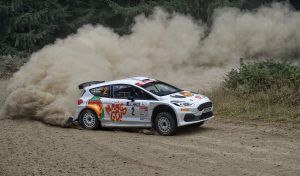 end of the season if they are to capitalise on their earlier successes. Meanwhile, Elliot Payne / Patrick Walsh (Fiesta Rally2) not only have two victories to their credit but have also backed them up with a pair of second-places and one third.

Even so, there is still work to do if they are to achieve their aim and become the latest in a long – and illustrious! – line of BTRDA Gold Star Rally Champions…
Perry Gardener / Jack Bowen (Fiesta R5) were leading the points table prior to an accident on the Nicky Grist Stages in July and, in spite of finishing runners-up on the recent Woodpecker Rally, currently trail Payne / Walsh & Stephen Petch / Michael Wilkinson’s Fiesta Rally2. All three crews have, so far, only registered one retirement apiece and, thus, still have an element of wriggle-room before Judgement Day at the end of October!

Class B13 is proving to be its usual hot-bed of competition to the point that, without a blemish on their finishing record, Richard Hill / Pat Cooper (Lancer EVO9) are actually leading the Gold Star Championship overall. We could, therefore, be accused of stating the obvious by recording the fact that they also head B13 – currently by a considerable margin! The one crew who could yet rain on their parade is Russ Thompson / Steve Link (also Lancer EVO9) who, similar to Hirst / Dear, already have a couple of gaps on their scorecards and cannot afford to put a foot wrong. Pressure – what pressure?…. 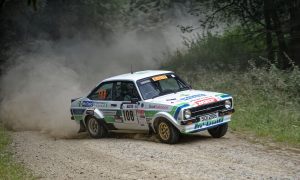 In common with Gold Star, the MRF Tyres BTRDA Silver Star® Championship has also witnessed four different winners so far this season and, from them, it’s the ‘double top’ crew of Michael McDaid / Declan Casey (Escort Mk2) who are the first two-wheel drive car away as they attempt a hat-trick.

The Irishmen will have the Talbot Sunbeam VXR of Andy Davison / Tom Murphy and early season leaders Rob Wright / Mark Fisher (Escort Mk2) to keep an eye out for while, from the start, current series leader Nick Dobson (Escort Mk2) is only a couple of minutes behind this group.
Jonathan Jones / Jez Rogers (Fiesta) lead the race to succeed Ioan Lloyd / Sion Williams as BTRDA Rallye R2 Cup Champions, but there is still work to be done before the matter is put beyond doubt. So, a good run over the North York Moors would help immeasurably!
Another category-leading crew to fall foul of the terrain on the Woodpecker was Grant Inglis / Gavin Chisholm whose Escort came off second-best in a skirmish with some logs. In spite of this setback, they’ve managed to maintain their lead in the Jordan Road Surfacing BTRDA Historic Cup, albeit by a reduced margin from Michael McDaid / Declan Casey (Escort). James Lepley (Escort) had his best run to-date on the Woodpecker and will be hoping for a continuation in this change of fortune while the presence of Alex Waterman / Glyn Thomas (Datsun 1600SSS) and Ernie & Patricia Lee (BMW 325) provides further variety to the category as a whole. 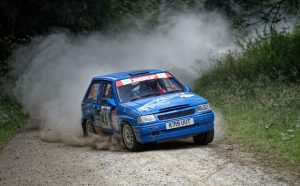 to overhaul him. Another crew to fall foul of a broken driveshaft last time, Richard Garnett / Stefan Arndt (Micra) were, thus, unable to further their cause while, at the same time, Pete Gorst / Mark Twiname can count themselves lucky as, by the finish at Ludlow Racecourse, their blue Nova was sporting a large dent in its roof!   Nevertheless, returning to the subject of dropped scores, Gorst / Twiname have previously accrued three maximums and, while not sufficient to put the matter beyond doubt, will certainly benefit from them as the season draws to a close.

Having had July and August to regroup, contenders for the Motorsport UK English Rally Championship in association with Seacon UK, are being called to arms for the second time in three weeks on the Trackrod Forest Stages! Richard Hill (Lancer EVO9) leads Nick Dobson (Escort Mk2) by a single point, with Ian Joel (Escort Cosworth) and Stephen Petch (Fiesta Rally2) tied in 3rd place, another one point behind.

SPECTATORS : Advanced tickets (no cash on the day) and details are available via the website (www.rallyyorkshire.co.uk/spectator-information).