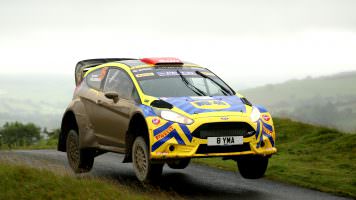 As the RAVENOL BTRDA Rally Series®’ traditional summer break comes to a close, Sixty & Worcestershire Motor Club’s Eventsigns Woodpecker Stages rally serves to bring all the various Championships to order once again. The eight weeks since the Nicky Grist Stages have given those with designs on title success a chance to regroup and prepare for the final push for victory. Not least of these will be Charlie Payne/Carl Williamson whose Ford Fiesta has topped the RAVENOL BTRDA Gold Star Rally Championship points tables since the Malcolm Wilson Rally back in March. The opportunity to put the matter beyond doubt last time out was missed when their hitherto reliable car succumbed to electrical failure, allowing their closest rivals, Luke Francis/John H Roberts (Mitsubishi Lancer EVO9) through to not only take another victory – their third of the season so far – but also to keep the pressure on in the race to succeed Dave Weston/Kirsty Riddick as Gold Star Champions.

So, Ludlow Racecourse beckons for all those contesting the Woodpecker Stages as the BTRDA Rally Series moves into the final furlong! However, as befits such a popular and well-supported Championship, Gold Star honour is not purely between Payne and Francis – there are others just waiting for the opportunity to pounce, should something untoward occur to those in front! After an indifferent start to the season, Stephen Petch/Michael Wilkinson (Fiesta R5+) have taken two seconds and one third on the last three events to move themselves into contention when it matters, while Paul Benn/Richard Cooke (Focus WRC) have been right behind them on both the Carlisle and Nicky Grist Stages. All the aforementioned have work to do if their ambitions are to be realised – notwithstanding the fact that, on paper, there are several others who could still theoretically come good. As part of the ‘Road to Wales’ initiative, the eventual winner of the 2016 RAVENOL BTRDA Gold Star Rally Championship will have earned themselves a free entry into the Wales Rally GB National Rally.

With two events to go and dropped scores about to come into play, the BTRDA Production Cup table has something of a strange look about it. Having finished all six rounds to date, Sam Bilham’s consistency puts his Fiesta ST into the lead of this highly competitive category. However, a mere three points adrift and with three maximums from just four scores on the board, Russ Thompson (Lancer EVO9) is next with Cameron Davies, who has taken maximum Fiesta ST Trophy points on all five events he has contested thus far, one behind him. Then we have another Davies – Andy, partnered by Max Freeman in a Subaru Impreza, who also has a couple of maximums to his credit but, like Thompson/Murphy, these are matched with a couple of DNFs, leaving neither crew with any margin for error between now and the end of September. In the Fiesta Trophy itself, Davies and Bilham are neck-and-neck at the top, with George Lepley in third place.

The Top Ten cars in the RAVENOL BTRDA Silver Star® Championship all have ‘Ford’ badges adorning their bodywork but the final pecking order is by no means settled yet. Assisted by a maximum last time out, Gavin Edwards/Caron Tomlinson lead the charge in their Escort, with the ever-present Cameron Davies/Lee Taylor (Fiesta) next. Defending Champion Boyd Kershaw and co-driver Bryan Hull (Escort Mk2) are third and, even though they already have two firsts and two seconds on the board, the pressure is now on to maintain this level of performance through to the close. Phill Burton/Mal Capstick’s aspirations were dented (literally!) on the Plains Rally and they were forced to miss the Carlisle Stages while their Escort underwent the work necessary to return it to the shape originally envisaged by the designers at the Ford Motor Company! They’ve been 3rd in the Silver Star points four times now – as the end of the season beckons, a couple more scores of a similar value – or better! – would do wonders to their final tally!

Ludlow farmer Dave Brick, who scored maximum Thomas Panels BTRDA 1400 Championship points in his Nova on the opening round of the season, returns for his ‘home’ event and, while no longer in the hunt for overall honours, could still show the regulars a thing or two! Jordan & Paul Hone (Proton Satria) & James Williams/Paul Wakely (Ford Ka) will be following him away from the Racecourse, while Brick Junior, Freddy, is also in the line-up. His particular Nova came up trumps on the Somerset Stages, but three retirements have set his campaign back somewhat.
Nissan Micras are the preferred mode of transport for Charlie Barlow/Dale Furniss and Matt Jackson/Claire Williams and, while they’ll be concentrating on their own private battle, an interesting entry will separate them from the start…. 1994/5 BTRDA Gold Star Champion Ricky Evans, co-driven by son Mathew, takes to the stages once again in a Peugeot 205…..
As they make a bee-line for Ludlow, Neil Andrew/Dom Adams lead the Thomas Panels-backed series from Carl Davies/Richard Jones, also in Micras, with the Hones in 3rd place but, as is the case with everything else, watch this space!

Dominic Hodge/Stefan Arndt, in their familiar Micra, are the leading Vital Equipment BTRDA Rally First Championship contenders in the Woodpecker entry, ahead of Richard Wells/Calvin Houldsworth (VW Polo). Retirement on the Nicky Grist Stages saw the series lead slip from Hodge/Arndt’s grasp, the cudgel gratefully taken up by Emily & Eliot Retallick (Peugeot 205XS). Somerset Stages ‘winner’ Chris Hickman and Sheldon Furby/Carrie Rogers (both MG ZRs) will also be looking to the event as an opportunity to move their campaigns forward.

After a brief foray via the Tyneside Stages, the MAXXIS MSA English Rally Championship returns to the gravel on the Woodpecker as Cameron Davies attempts to consolidate his lead in the points. Kit Leigh in a Fiesta R200 is next, while Freddy Brick, Emily Retallick and Sam Bilham are all keeping close company, comfortably in range of the leaders. So, there is plenty of unfinished business here, too!  (A Preview of the MAXXIS MSA English Rally Championship on the Woodpecker can be found Here )