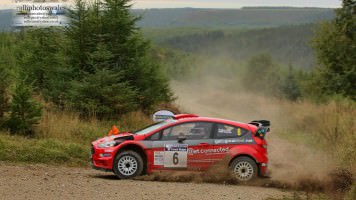 Fresh from their recent win on the non-Championship Riponian Rally, not to mention 2nd place on the BTRDA Series-opening Cambrian Rally, Charlie Payne/Carl Williamson (Ford Fiesta) will lead the field away from the start at 7.00am, closely followed by the Fiesta R5+ of Stephen Petch/Michael Wilkinson. Ulstermen Connor McCloskey/Damien Duffin (MINI Cooper WRC) will be aiming to consolidate the 3rd place they earned on last month’s Cambrian Rally, while right behind them on this occasion will be the leaders of the 2016 RAVENOL BTRDA Gold Star Rally Championship following the first round, Luke Francis/John Roberts (Mitsubishi Lancer EVO9).  Meanwhile, setting out on their respective campaigns in the Lake District are David Wright/Steve Pugh (Ford Focus WRC) and Mark Donnelly/Barry McNulty (Subaru Impreza S10). Wayne Sisson (Mitsubishi Lancer EVOX), with Neil Shanks in the co-driver’s seat for the Malcolm Wilson Rally, finished 9th in North Wales to open his Gold Star account, while Karl Simmons/Mark Glennerster (Impreza WRC) were less than a minute behind him. For their part, Steve Simpson/Patrick Walsh (Fiesta S2000) both claimed top 10 results even though they were in different cars!

Leading the BTRDA Production Cup runners in the Lake District are Aaron McClure/Alex Kihurani in their Lancer EVO9 and you’ll have to excuse the aroma of burnt midnight oil pervading the team following their indiscretion on the Cambrian Rally. The team may take some crumbs of comfort from the fact that both Russ Thompson/Andy Murphy (Lancer EVO9) and Andy Davies/Max Freeman (Impreza) also failed to bank any points in Wales and, consequently, all three crews are starting again from scratch!  The DMACK Fiesta ST Trophy is already attracting healthy interest and the Malcolm Wilson Rally will give Owain Rowlands/Emyr Hall the opportunity to capitalise on the lead they earned on the Cambrian. As with any ‘One-Make Series’, the level of competition will increase in line with crews’ familiarity with their steeds but, with some interesting names in the line-up, it’s definitely a case of ‘watch this space!’…

Boyd Kershaw’s defence of his RAVENOL BTRDA Silver Star Championship title was put on hold after his Escort developed gearbox problems in the days leading up to the Cambrian. Now, though, another month down the line and the ‘Flying Kiwi’ and co-driver Bryan Hull are back. Cambrian leaders John Rowlands/Glenn Latham are absent this time, but 2nd & 3rd-placed Gavin Edwards/Caron Tomlinson and Phil Burton/Mal Capstick (both Escorts) will be in Cockermouth, as will former Silver Star Champions Allan McDowall/Gavin Heseltine in their RS1800. 2015 BTRDA Historic Cup winner Paul Street is another one looking to put his name on the trophy in consecutive seasons, but his Escort disgraced itself in North Wales, leaving him with a ‘zero’ balance in his points account!

Dave Brick (Nova) leads the Thomas Panels 1400 Championship as he heads up the M6 from his farm near Ludlow. Keaton Williams takes the place of Phil Clarke in the co-driver’s seat this time as the pair set about keeping the likes of Chris Powell/Jim Lewis (Sunbeam), Jordan & Paul Hone (Satria) and Mat Jackson/Claire Williams (Micra) at bay. Having missed the Cambrian, 2015 multi-award winning brother-and-sister Keith & Mairi Riddick (MG ZR) begin their season in the Lake District and, although down on overall numbers this year, the 1400 Championship is already shaping up to be as hard-fought as ever!

There is a three-way tie for the lead of the Vital Equipment BTRDA Rally First Championship after Round 1 but, with just Dominic Hodge/Stefan Arndt (Micra) taking the start of the second event in the calendar, that situation may just have changed by the end of the day. David Perkins/Heather Merrison, in another Micra, will be carrying on where they left off, but both Richard Wells/Calvin Houldsworth (Polo GTI) and Emily & Eliot Retalick (Peugeot 205) will be hoping for sight of the finish ramp this time….

Documentation and Scrutineering for the Malcolm Wilson Rally take place at M-Sport’s premises in Dovenby Hall and then, come the day, eight special stages in some of the classic Lake District forests form the meat of the event. The first car leaves the start at 7.00am on Saturday 12th March and then, for those who prove themselves to be up to the challenge, the Hired Lad at Penrith Auctions will be ready to welcome them back from 2.30pm onwards. Prizegiving will also take place there.