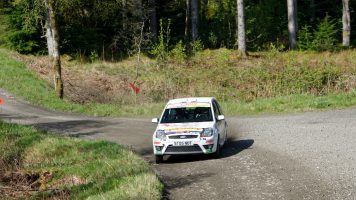 LOOKING TO THE FUTURE – a valuable prize…!

Congratulations to the 2019 BTRDA Award Winners

Congratulations to all the 2019 BTRDA Rally Champions.   Euan Thorburn and Paul Beaton are the 66th BTRDA Gold Star Champions in a hugely successful year when they dominated both the BTRDA Rally Series and the Scottish Rally Championship. George Lepley is the BTRDA Silver Star Champion Driver for the second year and Tom Murphy is the Silver Star Co-Driver Champion. In addition to the Silver Star title George has also won the BTRDA Historic Cup and the BTRDA Junior Driver. The BTRDA Bronze Star (1400) Championship titles in 2019 have been won by Callum Black and Michael Gilbey, whilst Joseph Keen is the BTRDA Rally First Champion driver and Mark Townson is the Rally First winning co-driver.

A list of all the 2019 JORDAN Road Surfacing BTRDA Rally Series Award Winners can be found HERE   There are also some ‘Special Achievement Awards’ on the list to be presented by the BTRDA, but the winners of these trophies will not be announced until the Awards Evening. A list of all the award winners in the MAXXIS Motorsport UK 2019 English Rally Championship will be published after the final round which is the Wyedean Stages Rally on Saturday 9th November.

The awards for the 2019 JORDAN Road Surfacing BTRDA Rally Series and the MAXXIS Motorsport UK 2019 English Rally Championship will be presented at the 2019 Dinner and Awards Ceremony which takes place on Saturday 11th January 2020 in the function suite at the Drayton Manor Hotel near Tamworth, B78 3SA. This date also coincides with the 2020 Autosport Show at the NEC so competitors would be able to combine the two events if they wish to do so.  Ticket Application forms for the Awards Evening and Dinner [ £45 ] and details of the preferential room rates [ £60 ] available for BTRDA guests at the at the Drayton Manor Hotel will be published shortly.

The 2020 MRF Tyres BTRDA Rally Series calendar has received Motorsport UK approval and is as published in the earlier News Item HERE       2020 registrations will open on 1st December.