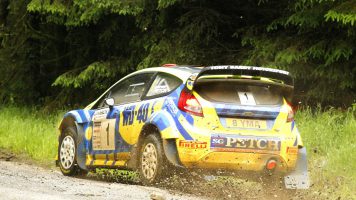 Congratulations to the 2017 Award Winners plus more info on 2018

The Trackrod Forest Stages in North Yorkshire rounded off another very successful Ravenol BTRDA Rally Series.     A full list of all the 2017 championship point scores can be found HERE

Stephen Petch and Michael Wilkinson become the 64th BTRDA Gold Star Champions and to mark this achievement they had a resplendent gold roof on their Fiesta WRC. (see photo above)  Stephen now emulates his father Steve who put his name on the famous Gold Star trophy in 1992 !   Ashley Davies is the 64th Silver Star Champion Driver and Andrew Boswell is the Silver Star Co-Drivers Champion. The BTRDA 1400 Championship titles have been won by 19 year old Ed Fossey and Chris Sharpe-Simkiss, whilst Bart Lang and Sinclair Young are the BTRDA Rally First Champions.  The names of all the BTRDA Rally Champions going back to 1954 can be found HERE

All the awards for the 2017 RAVENOL BTRDA Rally Series will be presented along with the MAXXIS MSA English Rally Championship awards at the 2017 Dinner and Awards Ceremony which will take place on Saturday 6th January 2018 at the RAMADA Penns Hall Hotel, Sutton Coldfield, West Midlands. B76 1LH.  Ticket Application forms can now be downloaded HERE

We can also confirm more info about some of the changes that will be introduced to the BTRDA Rally Series in 2018.