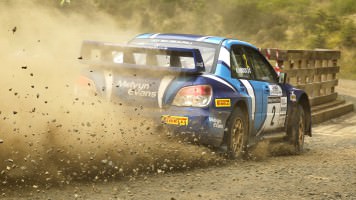 Fast and furious on the 2015 Trackrod Forest Stages

The Trackrod Forest Stages was the penultimate round of a closely contested BTRDA season. Some of the 2015 championship matters were settled, but the REIS-RAVENOL BTRDA Silver Star Championship and the Kick Energy 1400 Rally Championship will be decided at the Cambrian.

It was Charlie Payne / Carl Williamson (Fiesta) who took the overall event win on Charlie’s local event after a long battle with Stephen Petch / Ian Windress (Fiesta R5+) who retired on the penultimate stage after their throttle jammed open!

Second overall on the Trackrod Forest Stages were Damian Cole / Jack Morton on only their second event in the Fiesta WRC and this excellent result was sufficient to secure the inaugural BTRDA Rally Challenge title. Damian and Jack had already scored well on the Somerset, Manx, Tyneside and Mewla, so in the end took this new mixed surface title by some margin. This was the first year of this mixed surface BTRDA Rally Challenge and it will certainly continue again in 2016.

Group N honours and a very impressive 3rd overall went to Pat Naylor / Ian Lawrence (Mitsubishi Evo) and the points they scored were enough to secure the 2015 Hyundai Genpower Production Cup title ahead of their main rivals. They now have points total (113 points) which is one more than any of their rivals including Tom Naughton, Russ Thompson, Roland Llewellyn and Arron McClure can reach on the Cambrian Rally.

In REIS-RAVENOL BTRDA Silver Star Championship it was another win for Callum Black / Paul Wakely (Citroen R3T), and Callum is now favourite for the Silver Star drivers title but he still has to finish well on the Cambrian Rally and ahead of his main rival Boyd Kershaw / Bryan Hull (Escort Mk2), whilst Rhys Yates (Fiesta R2) could still be successful if the other two favourites fail.

The Kick Energy 1400 Rally Championship was the expected contest between Dave Bennett / Alistair McNeill, (Corsa) Ashley Slights / Alex Lee (Toyota Yaris) and Mat Smith / Chris Row (Proton Satria), which on this occasion was won by Ashley Slights. This win sets up a perfect ‘winner takes all’ contest at the Cambrian. Long-time championship leader Ryan Weston is still ahead in the points table but with Dave Bennett, Ashley Slights and Dave Brick all still in with a very good chance of snatching the title.

There are now more than 200 individual drivers and 180 co-drivers who have scored points in the 2015 BTRDA Rally Series with total registrations topping 400!