For the first time since 1989, the Rallynuts Stages (or ‘Severn Valley’ as it was known prior to the involvement of its current sponsor) features in the JORDAN Road Surfacing BTRDA Rally Series and, following the unfortunate cancellation of the Malcolm Wilson Rally due to the effects of the ‘Beast from the East’, moves up to become effectively the second event in the calendar. The organisers, Midland Manor Motor Club Ltd, have attracted a quality entry of 130 crews who will be heading for the Royal Welsh Showground in Builth Wells on 14th April.

Coincidentally, the Top Three finishers from the 2017 Rallynuts Stages – Connor McCloskey/John Rowan, Charlie Payne/Carl Williamson and Martyn & Dawn England – are all chasing JORDAN Road Surfacing BTRDA Gold Star® Championship points in their respective Fiestas this year. They will be joined by series leaders following the Cambrian Rally, Paul Bird/Jack Morton in the former’s Focus WRC, plus a gaggle of Fiestas in the hands of defending Gold Star Champions Stephen Petch/Michael Wilkinson, Julian Reynolds/Patrick Walsh, Hugh Hunter/Rob Fagg and Matt Edwards/Darren Garrod who set multiple fastest stage times on the Cambrian but whose chances of a top result were ruined by damaged suspension during the morning.  Following a retirement in North Wales, Luke Francis/John H Roberts will also be looking to put their Gold Star season back on track in Mid Wales. The photo is of Luke and John (Fiesta WRC) – trying very hard before their retirement on the Cambrian.  (Images courtesy of Kevin Money)

In Class B13, the rivalry between Dylan Davies/Llion Williams (Impreza) and Ian Joel/Graeme Wood (Escort Cosworth), which went marginally in favour of the former crew on the Cambrian, is set to continue but, amongst others joining the fray this time, Richard Hill/Steffan Evans, in another Impreza, will doubtless be aiming to upset the apple cart!

Maintaining the theme of close competition, especially over the past couple of seasons, the BTRDA Production Cup has become used to seeing a handful of seconds separating winners and ‘others’. Defending Cup Champions Pat Naylor/Ian Lawrence lost out to Russ Thompson/Andy Murphy in the battle of the Lancer EVOs last time and will be hoping for a spot of role reversal on the Rallynuts Stages. Meanwhile, for their part, Tom Naughton/Will Rogers will be looking for a finish after mechanical bothers saw to it that their Lancer didn’t reach the final control on the Cambrian. 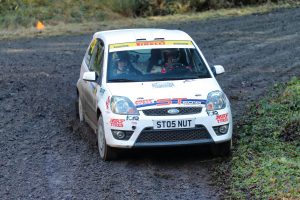 With the possible exception of Fiesta ST Trophy leaders Zak Hughes/Tom Wood, all the other contenders will be out to change the look of the points table on the Rallynuts Stages. James Giddings/Sion Cunniff and Kalvin Green/Osian Owen are currently in the remaining podium positions and would dearly love to ‘up’ their game – in more ways than one!

After its amazing run on the Cambrian Rally to 17th overall, the 1400cc Talbot Sunbeam of Chris Powell/Jim Lewis will be the best-placed JORDAN Road Surfacing BTRDA Silver Star® Championship starter next weekend. However, it goes without saying (but we will anyway!) that there’ll be some more powerful cars with the express intention of raining on their parade. The Escorts of Rob Dennis/Andy Boswell, Nick Dobson/Steve Pugh, Allan McDowall/Gavin Heseltine and the Citroen DS3 R3T of Richard Sykes/Simon Taylor plus the Talbot Sunbeam VXR of Andy Davison/Tom Murphy could, potentially, lead the charge but there’ll be others – lots of others!…

The addition of a BTRDA Rallye R2 Cup to the BTRDA’s Rally Series arsenal this year has certainly struck a chord. Nine drivers scored points first time out and now, on Round 2, the entry list has increased still further. George Lepley/Tom Woodburn (Fiesta) are the first-ever leaders of this particular category but, at this early stage of the season, the slightest of problems could spell disaster. Not wishing ill on their rivals (much!), Bob Vardy/Keaton Williams are best-placed to benefit from any misfortune that might hinder the leaders’ progress, with Jack Leese/Sam Spencer (Peugeot 208) hoping that lightning could possibly strike twice and upset both crews’ rhythm on the day! The entry list also benefits from a couple of R2 cars crewed by BRC regulars.

And so to the BTRDA 1400 Championship – another area in which the BTRDA took a pioneering stance, in this case some 16 years ago. In spite of the decline in numbers, due in no small part to the insistence that the lesser powered vehicles are no longer able to run at the front of the field, those who campaign such cars exhibit a similar level of commitment to those fighting for outright victory! Previously mentioned in despatches, Chris Powell/Jim Lewis will have been dining out for the past couple of months on their Cambrian result, but now it’s time to do it all over again! 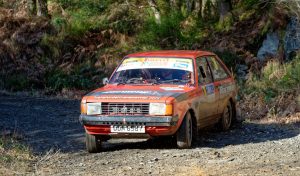 Among those hoping they don’t/can’t, we find Tommi Meadows (KA) and Perry Gardener (Nova) and good to see the return of Kieran Darrington (Corsa).    There’s an entry from the Brick family in a Corsa but, currently, that’s the only information to which we’re privileged! Nevertheless, historically, such is the reputation of the Ludlow farming dynasty that, come the day, whoever is ensconced in the driving seat will require careful monitoring by those hoping to come out on top.

Although the BTRDA Rally First Championship caters for cars up to 2-litres, albeit with minimal technical modifications, competitors find themselves under the same constraints in regard to running order as do the 1400s. Notwithstanding, a trio of 2-litre cars have been entered by the ‘rallyme’ organisation for Wesley Gilford/Ryan Griffiths (Fiesta ST) and Matt Baddeley & Guy Butler (both Toyota Corollas). Having missed the opening round, 2017 Champions Bart Lang/Sinclair Young return in their all-conquering Nissan Micra.