As the 2021 MRF Tyres BTRDA Rally Series® moves towards its conclusion, George Lepley finds himself with a slender lead in the race for the BTRDA Gold Star® Rally Championship. The 24-year old, from Newark, has already clinched the BTRDA Junior Driver title and, with a ‘full-house’ of four maximum scores, he and co-driver Tom Woodburn are confirmed as winners of Class B13 in their Mitsubishi Lancer EVOX. However, they still have a battle on their hands if they are to taste Gold Star glory!
Title photo shows George Lepley / Tom Woodburn (Mitsubishi Lancer EVOX) in a hurry!

Returning to its once-traditional autumn spot, the Visit Conwy Cambrian Rally (30th October) is the penultimate round of the MRF Tyres BTRDA Series and will see contenders for all the various categories heading for its base in Llandudno. In Gold Star terms, a pair of Skoda Fabias in the capable hands of Garry Pearson / Niall Burns [the 2021 Scottish Rally Champions! ] and Ian Bainbridge / Will Atkins are Lepley / Woodburn’s nearest rivals, while Elliot Payne and Callum Black, both of whom have scored maximums on earlier events this season in their Fiestas, could also attain top spot when it matters most!  Meanwhile, fresh from 3rd overall on the recent Trackrod Forest Stages in his Mitsubishi Mirage, and still with an outside chance of success, 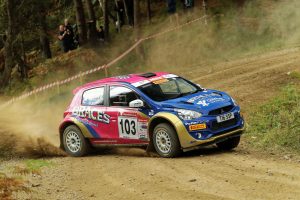 Tom Llewellin’s first full season in both a four-wheel drive vehicle and the BTRDA Series continues. Anyone doubting the youngster’s commitment does so at their peril !… See photo on left.

Although, as stated, Class B13 has been claimed, the intensity of the battle for the other podium places shows no sign of abating! Matthew Hirst / Declan Dear, Maxx Bradshaw / Liam Whiteley & Russ Thompson (Lancers) will square up to Ian Baumgart / Dave Robson (Impreza) and the MRF Tyres-sponsored Escort Cosworth of Ian Joel / Graeme Wood.

The MRF Tyres BTRDA Silver Star® Championship has seen different ‘winners’ on each of the four events so far. Such distribution of top honours currently leaves the way open for upwards of 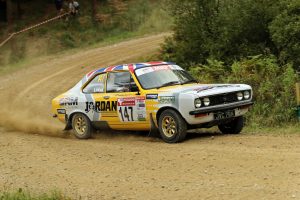 a dozen crews to walk away with the title, come mid-November. That number will, doubtless, be depleted somewhat following the Cambrian Rally but, prior to a rapid trip round parts of North Wales, it’s Paul Street / Ian Jones who hold sway in their Escort by the slenderest of margins from the Avenger of Baz Jordan / Arwel Jenkins.

Owen McMackin’s 30 points on the Trackrod moved his Escort up to 3rd in the table, with Ashley Davies / Sam Fordham (Escort) and Ioan Lloyd / Sion Williams’ Peugeot 208 R2 in close attendance. Maintaining the family tradition, Robert Gough (Escort) took maximum Silver Star points on the Woodpecker Stages – an event which his dad, Richard, has won five times outright – and could now do with a repeat performance on the Cambrian Rally to further enhance his chances of the title.

The Jordan Road Surfacing BTRDA Historic Cup points table is, in part, a mirror-image of that for the Silver Star in that it’s Baz Jordan, himself, who leads the charge but, once again, by just a solitary point from Paul Street! Touch wood, Tom Coughtrie has ironed out the problems that dogged the initial forays in his Mitsubishi Galant VR4 and, with four finishes from four starts so far, he and Ian Fraser occupy 3rd place in the Historic Cup standings.

With three maximum scores in each, Ioan Lloyd / Sion Williams lead both the BTRDA Rallye R2 Cup & BTRDA R2 Junior Cup in their Peugeot 208. Put one way, this means that the pair have two further opportunities to take the one maximum required to put the matter beyond doubt or, put another, it still gives Jonathan Jones (R2 Cup), Connor Tolson and Sam Bilham (both R2 & R2 Junior Cups) hope that they can halt the charge in their respective Fiestas!…

As far as the Fuchs Lubricants BTRDA 1400® Championship is concerned, having missed the Trackrod Rally, Adrian & Matt Walk return in their giant-killing 1400C Ford Ka which came out 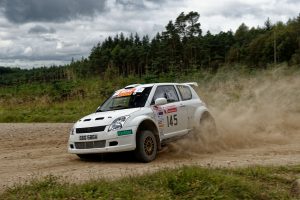 on top on the Woodpecker Stages. For their part, Richard Jordan / James Gratton-Smith (MG ZR), Steve Black / Paul Morris (Suzuki Swift), Dave & Toby Brick (Nova) and Aaron Rix (Escort) will all be intent on ensuring that they don’t afford the Ka the opportunity to repeat the procedure, leaving the ball firmly in their court!… 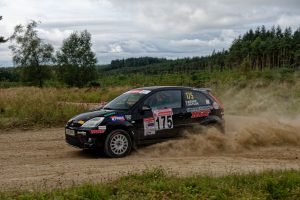 <<<<<<   Tom Naylor / Tom Bishop (Fiesta ST) are engaged in mortal combat with Simon Double/ Jessica Mitchell (MG ZR) for the bragging rights in the MRF Tyres BTRDA Rally First Championship, with the former driver currently holding the upper hand – just!  For the first time this season, they’re joined by Andrew & Oliver Wheatley (1.4 Ford Puma) who, while obviously not in contention for overall honours, have previously exhibited sufficient speed suitable to keep the front-runners on their toes!