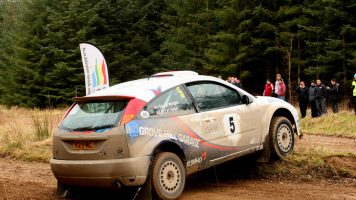 The enforced curtailment of the Cambrian Rally due to adverse weather conditions in North Wales sees the spotlight now fall on the Cockermouth-based Malcolm Wilson Rally (11th March) to set the 2017 RAVENOL BTRDA Rally Series in motion. The event has attracted its best entry, both in quantity and quality, for several years and it won’t have escaped the sponsor’s notice that nine of the Top 15 cars are Fiestas that’ll be returning to their birthplace at M-Sport for the occasion!…

However, let’s begin by casting our minds back to Llandudno a month ago and, with all due deference to the Cambrian Rally organisers who were devastated after all their hard work came to nought, mention a couple of drivers who will be thanking their lucky stars that events turned out as they did!  On the Friday morning 2016 Cambrian winner Luke Francis (Mitsubishi EVO9) and the victor back in 2008, Hugh Hunter (Ford Focus WRC), had both been indulging in a spot of pre-event testing prior to the start of their BTRDA Rally Series campaigns. Returning from his test, Francis was involved in a non-fault RTA which rendered his Lancer undriveable, while Hunter’s engine snapped a belt, also causing a fair bit of damage. Although various ‘Plan B’s were investigated, come the start on Saturday morning, both Francis and Hunter were absent.  Imagine their surprise – not to mention relief – when news of the Cambrian’s abandonment broke!…..

So, as you were! The first BTRDA Rally Series contenders away from M-Sport at 7.00am on Saturday 11th March will be 2008 event winners David Bogie/Kevin Rae who, along with Desi Henry/Liam Moynihan, form a Skoda Fabia R5 sandwich, with Luke Francis/John Roberts as the filling! Double Malcolm Wilson Rally-winning crew, Euan Thorburn/Paul Beaton (2013/15) will be out to make it three in their Fiesta while, on his ‘home’ event, David Wright (Focus WRC), with Steve Pugh reading the notes, cannot be discounted either. 2016 RAVENOL BTRDA Gold Star runners-up Stephen Petch/Michael Wilkinson (Fiesta R5) have ‘form’ at this level of competition and it goes without saying that they’d dearly love to go one better this year – it also goes without saying however that, from such a heavyweight entry, whoever triumphs really will have had their work cut out!…

The quality entry continues with Wayne Sisson/Neil Shanks in an Evo X, Callum Black/Elliot Edmondson and Rhys Yates, who has defending Gold Star Champion Co-driver Carl Williamson for company this season, in Fiestas, while Karl & Guy Simmons have a Citroen DS3 R5 run by Melvyn Evans Motorsport who were responsible for Dave Weston’s 2015 RAVENOL BTRDA Gold Star® Championship winning Impreza. Although Steve Simpson/Patrick Walsh (Fiesta S2000) and Tom Preston/Andrew Roughead (Fabia R5) are not even in the top 20 starters, with the usual provisos, they are both perfectly capable of ending the day much higher!

From the foregoing, you’ll not be surprised to learn that the top BTRDA Production Cup runners don’t get a look in until the mid-20s!  Andy Davies/Max Freeman (Impreza) lead what is also an impressive field that includes Lancers for Richard Hill/Steffan Evans, Russ Thompson/Andy Murphy, Aaron McClure/Michael Gilbey & Sacha Kakad/James Aldridge.  Then, of course, we mustn’t forget the Fiesta ST Trophy runners, of whom nine will be present in Cockermouth. In spite of their non-turbo charged two-wheel drive configuration, their reliability proved to be more than a thorn in the side of their Class NR4 colleagues last year. Leading the team into battle this time is MAXXIS MSA English Rally Champion Sam Bilham who, with Cameron Fair in the co-driver’s seat, will actually have to wait until the Somerset Stages Rally next month to begin the defence of his title. However, for the present, he must concentrate on staying ahead of the likes of  Richard Wells/Calvin Houldsworth who start the Malcolm Wilson Rally closest to him.

The RAVENOL BTRDA Silver Star® Championship points tables will feature some different names in 2017 – those occupying the top four places at the conclusion of last year’s series have all moved on, but Ashley Davies/Sam Fordham have signalled their intention of repeating the exercise. Their Escort Mk2 is set to be joined by the similar cars of Rob Dennis/Andrew Boswell, Mark & Ed Bentley, Jody Bowcott/David Millard, Steve Hopewell/Clive Jones & David Dobson. Add to that the BMW Compact of Colin & Martin Griffiths and Barry Jordan/James Grattan-Smith’s Hillman Avenger BRM and, very shortly, it’ll be ‘game on’!  Richard Sykes is expected to provide some strong front-wheel drive opposition to the fore in his Citroen DS3 R3, as are Dave Bennett/Alistair McNeil who return to the BTRDA Rally Series in a 1600cc Corsa. The speed of the former 1400 Champions caused people to sit up and take notice – can they now take that to the next level and vie for overall 2WD honours?

When it comes to the Thomas Panels BTRDA 1400 Championship, the Brick family is once again very much in evidence. Dave’s Nova is the highest-seeded in the category, with sons Freddy & Toby sharing a Corsa which leaves the start precisely four minutes later. Another Herefordshire crew, Chris Powell/Jim Lewis, will be hoping against hope that their Talbot Sunbeam gives them less cause for concern than it was doing this time last year when they registered three consecutive retirements. A ‘win’ on the Nicky Grist Stages went part way to redeem itself, but these failings have been noted and could well be held against it at some point in the future!  The 2006 BTRDA 1400 Champion Neil Weaver accompanied by Jessica Hockley brings out a Suzuki Swift and Charlie Barlow/Emma Morrison return in the very quick Micra.