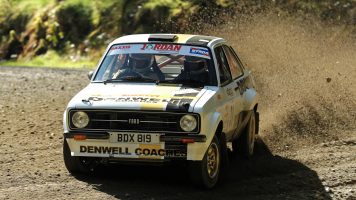 The BTRDA is delighted to welcome two new initiatives ahead of the start of the 2019 JORDAN Road Surfacing BTRDA Rally Series – and both feature long-time staunch supporters of the most popular Rally Championship in the UK….

Fuchs Lubricants (UK) take on the mantle of headline sponsors of the BTRDA 1400 Championship for the new season. Following the relaxation of the regulations governing the running order on events, the Fuchs Lubricants BTRDA 1400 Championship is poised for a strong season as all eligible vehicles will, once again, be running within the first group of rally cars through the forest stages on all BTRDA Rally Series events.

In confirming the arrangement, Russell Kenyon, Fuchs Lubricants (UK) plc Automotive Director, said, ‘We’re pleased to announce our renewed partnership with the BTRDA in sponsoring the 1400 Rally Championship and wish all participants the best of luck for the coming season and thank the organisers for their continued dedication and good work.”

In order to help celebrate this milestone, TCS founder Martin Liddle will be supporting the BTRDA Junior Championship with cash awards on each individual round. Based on the Index of Performance classification, as used to calculate the Junior Championship points, the first, second and third Junior Driver on each BTRDA Rally Series event will receive cash awards of £150, £100 & £50 respectively, while the Junior Co-drivers will also benefit to the tune of £75, £50 & £25 – a total of £3,150 over the seven-event series.

These awards are open to all registered competitors who were born on or after 1st January 1995.

Further information and Regulations for the 2019 JORDAN Road Surfacing BTRDA Rally Series, which begins with the Cambrian Rally on 16th February, will be published on this website.