Having won the Trackrod Forest Stages in both 2016 & 2017, it’ll be no surprise to learn that Charlie Payne/Carl Williamson are starting the final round of the JORDAN Road Surfacing BTRDA Rally Series with No.1 on the doors of their Fiesta. While having no influence on the standings in this year’s BTRDA Gold Star® Rally Championship – a title they won for themselves in 2016 – their speed over the stages of the driver’s ‘home’ event will, doubtless, provide a yardstick for those still hoping for an improvement in their end-of-season results. It also goes without saying that 2017 Gold Star Champions – and Trackrod runners-up for the past two years – Stephen Petch/Michael Wilkinson (Fiesta WRC) would dearly like to go one better this time. Having triumphed on several BTRDA Rally Series events in the past, this one has thus far eluded them (by just 0.2 second last year! ). Meanwhile, 2008 Gold Star Champion Hugh Hunter and Manx co-driver Rob Fagg (Fiesta) will be keen to put their early demise from the recent Woodpecker Stages behind them and end the season on a high.

Class B13 is certainly going to be a race to the finish – having been leading the charge, Ian Joel/Graeme Wood’s retirement last time out, when their Escort Cosworth suffered damaged suspension, dropped them to 3rd in the category, allowing Matthew Hirst/Declan Dear (Lancer EVO9) and Lee & Craig Burgess (Impreza) to nip in front. Add a returning Richard Hill/Steffan Evans (Impreza) into the mix and there’ll be some fireworks while this one sorts itself out.

Having already put the BTRDA Production Cup out of reach of the chasing pack on the Nicky Grist Stages back in July, Russ Thompson/Andy Murphy were another crew not to see the finish line of the Woodpecker Stages after their Mitsubishi Lancer’s gearbox cried ‘enough’. Notwithstanding, as they arrive in Filey they’re occupying the final Gold Star Championship podium spot and a good run over the North York Moors could just seal a Top Three finish for the season. Mind you, their closest rivals, Pat Naylor/Ian Lawrence, start right behind them and, with a score in hand over Thompson/Murphy, it’s not beyond the realms of possibility that they could claim third place for themselves….

James Giddings/Sion Cunniff lead the MRF Fiesta ST Trophy from Mat & Tim Tordoff, and no matter what happens on the day, that order won’t change. However, being in a position to contest a rally without any Championship pressures to worry about will be a refreshing change for both crews! 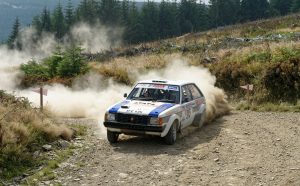 The 2018 JORDAN Road Surfacing BTRDA Silver Star Champions, George Lepley/Tom Woodburn, are absent on this occasion as they prepare for next weekend’s Wales Rally GB. Having dominated the inaugural BTRDA Rallye R2 Cup in their Fiesta, they won the prize-drive through the event’s ‘Road to Wales’ scheme.  Andy Davison/Tom Murphy (Talbot Sunbeam VXR – photo) are safe in runners-up spot in the Silver Star Championship but 3rd place, currently occupied by Ernie Graham/Robin Kellard’s Historic Spec. Escort Mk2, could have changed hands by the end of the day. Graham/Kellard are already confirmed as winners of the BTRDA Historic Cup this season and, while Barry Jordan/Paul Wakely’s Hillman Avenger could get very close to them in Yorkshire, so could Tom Coughtrie’s Mitsubishi Galant VR4. While, as previously discussed, George Lepley/Tom Woodburn have made the BTRDA Rallye R2 Cup all their own this season, finishing with a full-house (five maximum scores), Bob Vardy/Keaton Williams’ runners-up spot could be under threat from Tony Simpson/Ian Bevan but, whatever the final order, it’ll be a Fiesta 1-2-3!

As we slowly adapt to the return of the lower-powered cars running at the front of the field, Guy Butler finds himself hogging the limelight as his BTRDA Rally First Championship specification Toyota Corolla T Sport will be the first car away from the start of the rally from the Forest Drive in Dalby at 09.01 on the Saturday morning. With reverse seeding in force, team-mate Matt Baddeley will have an extra couple of minutes in bed before setting off in his identical car, with the VW Lupo of Mark Cox attempting to keep the pair of them honest!

Stuart Spyer/Peter Williams lead the BTRDA 1400 Championship contingent into the stages in their Vauxhall Corsa but, once again, the action will be fast and furious…. The Corsas of Chris Bush/Robert Smith and Kieran Darrington/Simon Jones precede Steve Black’s Suzuki Swift and the Ka of Tommi Meadows/Emma Morrison, before the Nova of Dave & Freddy Brick and Chris Powell/Jim Lewis’ Talbot Sunbeam enter the fray. The maths in regard to these two crews is somewhat complicated but, should Powell take a maximum and Brick finish 4th or lower, the former will leapfrog the latter to become 2018 BTRDA 1400 Champion.   Don’t worry! It’ll all become perfectly clear on the day….

The MAXXIS MSA English Rally Championship doesn’t reach the end of the road in Yorkshire. Contenders still have the Wyedean Stages, in early November to look forward to before 2017 victors Stephen Petch/Michael Wilkinson’s successors are known. In the meantime, competition is extremely tight with the top 6 drivers in the Championship covered by just 5 points. A graphic illustration of the Championship’s strength and depth would focus on Ian Joel who arrived at the start of the Woodpecker as series leader but, following his aforementioned demise, actually dropped ten places in the points table! There’s still time to make amends but with no margin for error!… 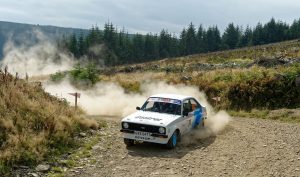 With both Matt Edwards and George Lepley not contesting the Trackrod Forest Rally because of Wales Rally GB the following weekend, it would appear that Tommi Meadows (Class 2), Ernie Graham (Class 4), Dave Brick (Class 2) and Matthew Hirst (Class 7) are in the best position to take a big step towards the title with a good result in Yorkshire.

A full list of all the MAXXIS MSA English Championship points can be viewed at www.englishrally.co.uk/english-championship-points and this just shows the many permutations that can still occur depending on success on the Trackrod and the Wyedean.