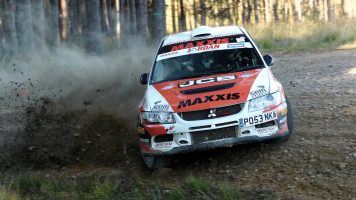 The 2019 JORDAN Road Surfacing BTRDA Rally Series® hits the road on 16th February when crews converge on Llandudno for the Visit Conwy Cambrian Rally. 2017 BTRDA Gold Star® Rally Championship winners Stephen Petch/Michael Wilkinson were thwarted in their attempts to take back-to-back titles last year, having to settle for the runners-up spot behind Matt Edwards/Darren Garrod. However, undaunted, they’re back for more and their Fiesta will leave the start one minute in front of the similar car of 2016 Gold Star winners Charlie Payne/Carl Williamson.  Add to that an intriguing entry from the 2013 Gold Star Champions Euan Thorburn and Paul Beaton from Scotland (Focus WRC)  – and so, straight away, there’s a battle to keep a close eye on!…   Adding a spot of variety to the current Ford Fiesta domination, the Citroen DS3 R5 of Irishmen Niall Henry / Damien Duffin will, no doubt, provide some tough opposition!

2017 Fiesta ST Trophy winner Sam Bilham moves up to a Fiesta R5 for an assault on the Gold Star Championship this year. Indeed, his Greenlight Sports sponsored Fiesta started life in the hands of Stephen Petch and, most recently, won the Cadwell Park Stages with Guy Smith at the helm.  Former UK Asphalt Rally Champion Steve Simpson and multiple BTRDA Forest Rally Champions Brian Bell / Paul Spooner will also be wheeling out their respective Fiestas for the start of the BTRDA’s 66th year of ‘Serious Fun’!….

Ian Joel / Graeme Wood (Escort Cosworth) achieved some impressive results in 2018 on their way to claiming the Class B13 crown. A season-ending 5th overall on the Trackrod Forest Stages last September will see them full of confidence as they embark on a new campaign – but nobody said it was going to be easy! The Mitsubishi Lancer EVO9 of Matthew Hirst / Declan Dear proved to be a thorn in their side for much of the year – and they’re also back for more! Then Richard Hill / Pat Cooper’s Subaru Impreza and the Lancers of Ieuan Rowlands / Emyr Hall and Richard Sykes / Simon Taylor will also be playing their part in what promises to be a very competitive class.

Meanwhile, the BTRDA Production Cup caters for FIA-homologated Group N machinery, both two and four-wheel drive, and the two front-running Mitsubishi Lancer EVO9s of 2017 winners Pat Naylor/Ian Lawrence and defending champions Russ Thompson/Andy Murphy are set to renew their intense rivalry! This time, however, they are joined by a third example in the hands of Scott Faulkner/Gareth Parry who will be intent on upsetting the apple cart!…

Cars contesting the MRF Fiesta ST Trophy also qualify for the Production Cup and, while only benefitting from two driven wheels, as opposed to the four of the Mitsubishis, 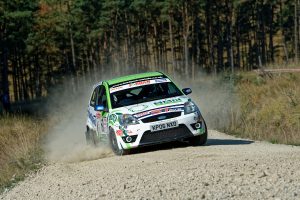 consistency has seen them punching above their weight on a number of occasions in the past. 2018 winners James Giddings / Sion Cunniff have moved on to the BTRDA Rallye R2 Cup – more of which anon – but new recruits Manxman Steven Ormond-Smith, Scotsman Bobby Mitchell and Welshman Elliott Stafford are set to ensure that Giddings’ successor could come from anywhere in the UK!

Notwithstanding George Lepley’s 2018 Jordan Road Surfacing BTRDA Silver Star® Championship victory in his R2 Fiesta, the two-wheel drive series has been the domain of rear-wheel drive vehicles in recent times. Lining up at the start of the Cambrian in the hope of rekindling that trend will be the Escorts of Owen McMackin / Lee Taylor, Steve Hopewell/Clive Jones and 2011 Champions Allan McDowall / Gavin Heseltine. Breaking the Ford monopoly is the rapid Talbot Sunbeam VXR of Andy Davison / Tom Murphy and, whilst entered in one of the Historic classes, a pair of Hillman Avengers for series sponsor Barry Jordan & Paul Wakely and that man Lepley are also eligible for Silver Star points!  Hoping to repeat his Class H4 win of last season, Tom Coughtrie returns in his Mitsubishi Galant VR4, while Jordan’s main rival may well be David Gathercole’s Escort RS1600. 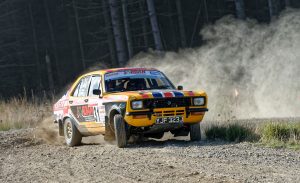 A Fiesta is still the car of choice for several drivers hoping to succeed Lepley to the BTRDA Rallye R2 Cup. In addition to Giddings/Cunniff, Mathew & Tim Tordoff and Richard Wells/Calvin Houldsworth also move across from the STs, while Perry Gardener and Tommi Meadows up the ante from the 1400s for the new season. Intent on showing the Ford devotees the error of their ways, 2017 BTRDA 1400 Champion Ed Fossey returns with a Peugeot 208 R2 and is partnered by fellow Jersey resident Will Rutherford-Child who, himself, sampled 1400 Championship glory with Julian Wilkes in both 2012 and 2013!

In the first full season since Motorsport UK’s relaxation of the rules in relation to the running order on events, much attention will be paid to the Fuchs Lubricants BTRDA 1400 Championship – in particular the level of entries. Competitors in this category run at the front of the field and initial signs are that the take-up is encouraging. Defending Champions Dave & Toby Brick (Corsa) return and the father-and-son team will, once again, be up against the Talbot Sunbeam of Chris Powell / Jim Lewis. Steve Black / Paul Morris’ Suzuki Swift beat the Bricks last time out, while Callum Black, whose Fiesta R5+ was dicing for the overall Gold Star Championship lead on his last serious attempt in 2017, is back in an MG ZR. Kieran Darrington made a welcome reappearance in his Vauxhall Corsa during last year and, with Abi Haycock reading the notes, he’ll be hoping to put his recent experience to good use. Also listed under ‘returnees’, 2016 BTRDA Rally First® Champions Dominic Hodge / Stefan Arndt are back for an assault on the 1400s in their Nissan Micra.

With classes that include cars up to 2-litre, the BTRDA Rally First Championship allows only limited modifications. The leading crews last year were in Toyotas but interest so far has been shown by such varying machinery as the Seat Arosa of Sam & Liam Johnson, Joseph Keen’s MG ZR and Alan King / Michael Jones’ 2.0 VW Lupo GTI.     Gentlemen, start your engines!….

Seven special stages in some of the classic North Wales forests await competitors on the Visit Conwy Cambrian Rally and, following their completion, the first car is due back at the finish in the centre of Llandudno at 3.30pm on Saturday afternoon.

Photo is Stephen Petch / Michael Wilkinson on their way to winning the 2017 BTRDA Gold Star Championship.