On their way to claiming the 2017 BTRDA Gold Star® Championship crown, Stephen Petch/Michael Wilkinson won the Plains Rally outright in their Fiesta WRC and, as they continue with a very robust defence of their title, a similar result on the fourth round of the 2018 JORDAN Road Surfacing BTRDA Rally Series would do very nicely, thank you!

Solid runs on both the Cambrian and Rallynuts Stages Rallies have put Petch/Wilkinson into 2nd place in the Championship points, almost within touching distance of the current leaders, Paul Bird/Jack Morton (Ford Focus WRC).  However, the ‘men of the moment’ are Matt Edwards/Darren Garrod who not only took their M-Sport prepared Fiesta to victory on the Rallynuts Stages but then followed it up with a similar result on the opening round of the British Rally Championship, the Pirelli Rally, at the end of April.  As a result they are seeded at No 1 on the Plains Rally and but for problems experienced on the Cambrian Rally, they would be arriving in Welshpool for the Plains as Gold Star leaders themselves….. The photo above is of Matt and Darren (Fiesta R5) – on their wat to victory on the Rallynuts Stages Rally.   (Image courtesy of Malcolm Almond)

Another crew to experience difficulties on the season-opener – in this case leading to a DNF – were Luke Francis/John Roberts who are sampling Fiesta WRC power for the first time this year. They went some way to putting their BTRDA campaign back on track with 2nd overall on the Rallynuts Stages, but now need to do it all over again to keep up with the leaders. Having forsaken their Mitsubishi Lancer, Sacha Kakad/James Aldridge have also joined the ever growing ranks of Fiesta R5 owners but its debut on the Cambrian was very short-lived after their particular example developed starter motor problems prior to the opening stage. Steve Simpson/Mark Glennerster (Fiesta S2000) will be hoping to emulate, or even improve on, the 5th place they attained the last time they contested the event together in 2016.  However, one crew who will be absent from the line-up are 2009 Plains winner Hugh Hunter and co-driver Rob Fagg who will be defending their victory on the 2017 Manx National Rally which, this year, takes place over the same weekend.

Russ Thompson/Andy Murphy (Mitsubishi Lancer EVO9) have come out on top of the BTRDA Production Cup contenders on both occasions so far and will, no doubt, be looking to continue this trend on the Plains Rally. Their main rivals, Pat Naylor/Ian Lawrence and Tom Naughton/Will Rogers have registered one DNF apiece and, consequently, have a spot of catching up to do! Meanwhile, unlike these three Lancer EVO crews, Jon Ross/Martin Auskerin have put their faith in a Subaru Impreza for their challenge and, so far, it has rewarded them with a couple of good points scores.

Although it’s still early days, James Giddings/Sion Cunniff lead the race to become MRF Fiesta ST Trophy champions but, prior to the Plains, Kalvin Green/Osian Owen are only three points behind them. Trophy winners on the Cambrian Rally, Zak Hughes/Tom Wood, suffered the indignity of a retirement on the Rallynuts Stages and now need a result to regain their momentum. However, several others, including the likes of Mat Tordoff, Martin Laverty and Richard Wells, would all like a say in how the situation pans out this time! 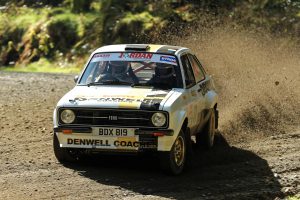 ents, two different winners so far in the Jordan Road Surfacing BTRDA Silver Star® Championship – and both crews feature in the starting line-up for the Plains. John Rowlands/Glenn Latham took first blood in their Escort, while Rob Dennis/Andy Boswell (see picture) did likewise on the Rallynuts Stages. Dennis leads the table from Ulsterman Owen McMackin whose bigger-engined Escort is up against the similar car of Ieuan Rowlands/Emyr Hall who performed a giant-killing act on the event last year by finishing 10th overall and first two-wheel drive, more than two minutes in front of their nearest rivals!

Andy Davison/Tom Murphy will be bringing their rapid Talbot Sunbeam VXR and, having been absent from the Rallynuts Stages, Barry Jordan returns with his Hillman Avenger. Ernie Graham/Robin Kellard maintain a vice-like grip on the BTRDA Historic Cup in their Escort, while Tom Coughtrie’s Mitsubishi Galant VR4 is exerting a similar level of dominance in Class H4. 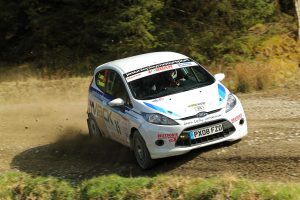 On the subject of superiority, George Lepley has taken his Fiesta to maximum points scores on both rounds of the BTRDA Rallye R2 Cup so far but, close behind, Jack Leese (Peugeot 208) and Bob Vardy (Fiesta) are tying for 2nd place. None of them will need reminding that even a minor indiscretion on the Plains Rally could result in a vastly different look to the leaderboard by the end of the day!…  It’s also interesting to note that Tommi Meadows has upgraded from his 1400cc Ka to an R2 Fiesta for the Plains – he’s obviously got his eye on the free entry to Wales Rally GB which will go to the BTRDA Rallye R2 Cup leader after the Woodpecker Stages in September.

Perry Gardener’s Vauxhall Nova leads the BTRDA 1400 Championship after two rounds, but he must be very wary of the two driver/car combinations that have already scored maximums. Having had a fantastic run on the Cambrian Rally, finishing second 2WD car on the day, Chris Powell/Jim Lewis’s Talbot Sunbeam let them down on the Rallynuts Stages. Hopefully, the severe dressing down it’ll have received, once recovered to its Hereford base, has been heeded and will now take its crew to further glory on the Plains Rally…. Then Perry has fellow Ludlow crew Dave & Toby Brick to contend with – having sat out the Cambrian, the father and son took their Vauxhall Corsa to the top step of the podium last time out and will be looking to repeat the exercise on the Plains. Meanwhile, Kieran Darrington’s return to the sport continues – a successful run on the Rallynuts Stages to 2nd 1400 in his trusty Corsa and he, too, will be heading for Welshpool.

BTRDA Rally First Championship contestants Matt Baddeley and Guy Butler started the Rallynuts Stages one minute apart in their identical Toyota Corollas and, by the finish, the gap had reduced to a mere 15s! The main difference here was that it was Baddeley’s second score while Butler had retired from the opening encounter. Sam & Liam Johnson (Seat Arosa), who showed the others the way home on the Cambrian, are back for more and, following successive retirements, Richard Ingleby/Alex Booth will be encouraging their MG ZR to get them to the finish this time!

The first car leaves the start of the Plains Rally in Welshpool at 8.00am on Saturday 12th May and 8 special stages await the 125-car entry. The organisers, Knutsford & District Motor Club Ltd., are delighted that, for the first time for 14 years, they’ve been able to include stages in Dyfnant forest and extend their gratitude to the various agencies that have made this possible.

The first car is then due back in Welshpool for the finish at 6.00pm.