The 2016 RAVENOL BTRDA Rally Series® moves on to the Plains Rally which takes place on Saturday 14th May. The organisers, Knutsford & District Motor Club Ltd, are rightly celebrating the 50th running of the event and, from this year’s entry of more than 150 cars, the only previous winner to appear in the list is Brian Bell who was victorious back in 1993 with future World Rally Champion Co-driver Phil Mills accompanying him! 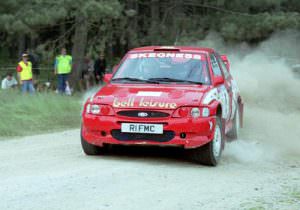 So, with all due deference to Brian’s illustrious career, it’s likely that there could be a ‘new’ name on the trophy this time. And the nominations are!…..
Charlie Payne/Carl Williamson (Fiesta) arrive at the rally’s base in Welshpool as leaders of the RAVENOL BTRDA Gold Star Championship, from Peter Stephenson (Focus WRC) and Karl & Guy Simmons (Impreza S11). All three have maintained unblemished finishing records to date and are reaping the rewards of their consistency. Then, of course, there’s Luke Francis/John H Roberts – although their Lancer EVO9 let them down on the Malcolm Wilson, they’ve won the two events they’ve finished outright. So, they’ll start the Plains on a high – will they finish it in the same manner?
David Wright/Steve Pugh (Focus WRC) are contesting only their second event of the season but, having finished the first in runners-up spot, still have time to catch up, albeit with no margin for error. Stephen Petch/Michael Wilkinson must be wondering who they’ve upset – their Fiesta R5+ hasn’t reached the finish of a BTRDA Series event since the middle of February but, provided a result is forthcoming on the Plains, all is not lost! Wayne Sisson (Lancer EVOX) opted to forego the long journey down to Somerset, but 9th on the Cambrian and 3rd on the Malcolm Wilson keeps him in the hunt, while Paul Benn/Richard Cooke (Focus WRC) did make a 750-mile round trip to Minehead and were rewarded with 6th overall.

It’s been something of a topsy-turvy start for several of the ‘usual suspects’ contesting the BTRDA Production Cup. After a retirement on the opening round of the season, Russ Thompson/Andy Murphy have picked themselves up, dusted themselves down and taken their Lancer EVO9 to maximums on Rounds 2 & 3 to restore some normality to their title chase. Both Roland Llewellin and Aaron McClure rolled their own Lancers in Somerset and, while Llewellin is back for the Plains, McClure’s second such excursion in three events rules him out of this one. Meanwhile, in spite of a DNF on the Cambrian, Andy Davies/Max Freeman (Impreza) are quietly getting on with it and Sacha Kakad/James Aldridge (Evo X) are fresh from a strong second place in Somerset.  Contenders for the popular Fiesta ST Trophy are still led by Sam Bilham/Richard Crozier who have finished all three events to date but they are now being hunted down by Cameron Davies/Lee Taylor who have ‘won’ the two they have done. George Lepley/Arwel Jenkins aren’t far behind either and we are expecting another new Fiesta ST crew, Martin Austerkin / Jon Ross, to begin on the Plains.
The RAVENOL BTRDA Silver Star® Championship has seen different crews with maximums on each event so far – and they’re all out on the Plains in their respective Escorts! John Rowlands/Glenn Latham took first blood, Boyd Kershaw/Bryan Hull were next and then series leaders Gavin Edwards/Caron Tomlinson came up trumps in Somerset. Phil Burton/Mal Capstick and Ashley Davies/Sam Fordham will also be looking to further their respective causes on the day.

Ulstermen Jordan & Richard Hone’s absence from the Somerset Stages has allowed the Micras of Carl Davies/Richard Jones and Richard Garnett/Rob Gilham to nip in front of their MG ZR in the race for the Thomas Panels BTRDA 1400 Championship. However, some form of equilibrium will be restored as they’re all taking the start of the Plains. On this occasion, it’s the two generations of the Brick family who have tendered their apologies – probably work on the farm taking precedence to rallying at this time of year, but the rapid Novas of dad Dave and sons Freddy & Toby will be absent from the line-up this time. Conversely, having missed Somerset, Mat Jackson/Claire Williams (Micra) return with the express intention of improving on their current 5th place in the Championship standings.

Maximums on the first two rounds of the Vital Equipment BTRDA Rally First Championship had put Dominic Hodge/Stefan Arndt in a dominant position at the one-quarter distance. However, their Micra threw a wobbly in Somerset, giving Phil & Chris Spilsted (Micra), Emily & Eliot Retallick (Peugeot 205XS) and Sheldon Furby/Carrie Rogers (MG ZR) the opportunity to narrow the gap – needless to say, they all grasped it with both hands! Of those mentioned, only the Spilsteds have declined the invitation to meet in Welshpool, but the
others will be jockeying for position and, with only five points between 1st & 4th, who knows what the table will look like at the end of the day!
The first car sets off from Welshpool at 8.00am on 14th May and then, seven stages (including the likes of Dyfi, Gartheiniog & Pantperthog) later, they will return to Welshpool for the finish at around 4.00pm. For further details of the Plains Rally, visit the event website: Plains Rally 2016

Next up on the BTRDA menu will be the Carlisle Stages on 11th June, which is fortunately not affected by the current NRW issue, and promises to be a cracking event with two stages of more than 13 miles in length and minimal double usage. The event is based at the premises of H&H Auctions in Carlisle, very close to junction 43 of the M6, with scrutineering documentation, start, service and finish at the same location.  More details and the on-line entry can be found at Carlisle Stages 2016