PLAINS TAKES OFF FOR OSWESTRY….!

Marking a change to the recent format of Knutsford & DMC’s Plains Rally, the Shropshire market town of Oswestry is preparing to welcome competitors for the fourth round of the JORDAN Road Surfacing BTRDA Rally Series®, and third of the MAXXIS Motorsport UK 2019 English Rally Championship, which takes place on Saturday 11th May. However, whether the move signals a change in the fortunes of the current front-runners remains to be seen!…

The JORDAN Road Surfacing BTRDA Gold Star® Rally Championship has, so far, been the preserve of Euan Thorburn/Paul Beaton whose Ford Focus WRC has proved unbeatable on each of the three events to date. It goes without saying, therefore, that the Scotsmen arrive at the start of Round 4 as series leaders and, having won the Plains Rally in both 2013 & 2014, it would be seen as brave to bet against them doing it for a third time! That said, a bad day at the office could potentially see them demoted from their exalted position at the top! 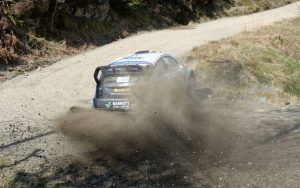 <<< This is currently the view that everyone else has of Gold Star leaders Euan Thorburn & Paul Beaton’s Focus!

Having managed to avoid the pitfalls that have interrupted the progress of many others, Scott Faulkner & Gareth Parry’s Group N Mitsubishi Lancer Evo9 (see main photo) is the current occupant of runner-up spot in the Gold Star table. However, as the season reaches the halfway point, there’s still plenty of room for manoeuvre in each of the classes and categories that make up the BTRDA Rally Series!

Irishmen Mark Donnelly and Connor McCloskey return in their Fiestas as they seek to capitalise on their 2nd & 4th places respectively last time out on the Rallynuts Stages. Then Stephen Petch/Michael Wilkinson, whose own Fiesta finished between the two Irish R5s a month ago, need to keep the momentum going. DNFs on the opening two events in the calendar have left them with no further margin for error, no matter how caused, if they are to deem their campaign a success. Sam Bilham’s experience in an R5 continues to expand – two consecutive Top Six finishes have seen him and co-driver Patrick Walsh move into the upper echelons of the points table and more of the same would prove beneficial to the pair!

Class B13 has developed into something of a ‘now you see ‘em, now you don’t’ affair! Different crews have taken maximum points on each of the first three events but, in each case, that’s the only score they’ve managed to put on the board. Hence, Ian Bainbridge (Impreza), Matthew Hirst (Lancer EVO9) and Ian Joel (Escort Cosworth) find themselves huddled together at the foot of the table. The consistency shown by both Richard Hill (Impreza) and Richard Sykes (Lancer EVO9) sees them in 1st & 2nd places, while their co-drivers – Simon Taylor (Sykes) and Steffan Evans (Hill) – also dominate the sharp end of the table, albeit diametrically opposed to their drivers! 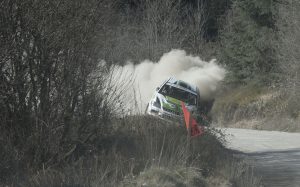 As mentioned above, Scott Faulkner/Gareth Parry’s season has started extremely well and, in addition to their Gold Star success, they also currently lead the BTRDA Production Cup. As far as the opposition is concerned, it’s turning into a game of ‘Snakes & Ladders’! Having led the charge after the Cambrian, Pat Naylor/Ian Lawrence didn’t finish the Malcolm Wilson but came back strongly on the Rallynuts Stages. Meanwhile, although defending champions Russ Thompson/Andy Murphy also had a day to forget in the Lake District, actually getting their EVO9 to the finish gained them some valuable points. However, there was to be no such happy ending last time out as the car finished up on its roof on the opening stage….

Zak Hughes/Tom Wood’s domination of the MRF Fiesta ST Trophy – three wins from three starts – has also moved them into the ascendancy in the overall Production Cup points table where, prior to the Plains Rally, they are Faulkner/Parry’s biggest headache. So, in Fiesta ST terms, it’s Wales in the lead (Hughes/Wood) from Scotland (Bobby Mitchell/Shannon Turnbull), with Ireland (David Kelly/Kenny Bustard) in 3rd. England is obviously far too busy with Brexit – no results to speak of there either!….

By fitting a larger capacity BRM engine in Baz Jordan’s Hillman Avenger, the JORDAN Road Surfacing BTRDA Silver Star® Championship leader George Lepley (with Tom Woodburn) automatically changed classes to H3 for the Rallynuts Stages. However, that’s the only thing that did change! 13th overall and first 2WD car home ensured that he not only mainta 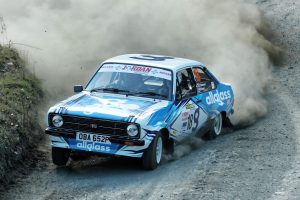 BTRDA Rallye R2 Cup leaders Perry Gardener/Keaton Williams (Fiesta) are clinging to Lepley’s shirt tails in the Silver Star Championship – indeed, Williams leads the Co-drivers’ table – but in R2 Cup terms, with two firsts and one 2nd place, they’ve earned themselves a bit of breathing space from Tony Simpson/Ian Bevan. Even so, any mistakes will be penalised as Tommi Meadows and the Tordoffs, Mat & Tim, also remain within striking distance. 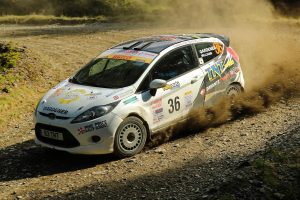 If perseverance counts for anything, Taylor Gibb/Jane Nicol must be due for a change of fortune soon – their score sheet shows three starts and three retirements while, breaking the R2 Fiesta monopoly, Jersey’s Ed Fossey returns for the Plains Rally, with Rhys Stoneman riding shotgun, in his Peugeot 208.

Even with four events still to run, the Fuchs Lubricants BTRDA 1400 Championship is shaping up for a grandstand finale. The current Top Six have finished all three rounds so far and the 7th placed driver – Callum Black – missed the opening encounter, only to take maximums on the two he has contested…. 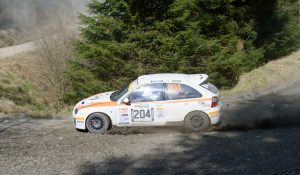 Following its recent visit to the closed-road asphalt Tendring Clacton Rally, the MAXXIS Motorsport UK 2019 English Rally Championship now moves to the Welsh borders – or should that be English borders?… – for Round 3.  Joint leaders in the class-based series prior to the off are Euan Thorburn (Focus WRC), Ian Joel (Escort Cosworth), Andy Davison (Talbot Sunbeam VXR), George Lepley (Avenger) and Zak Hughes (Fiesta ST), each of whom will be fighting to make top spot their own!

Similarly, Sam Bilham (Fiesta), Richard Hill (Impreza), Callum Black (MG ZR), Tony Simpson (Fiesta R2) and Tim Phelps (Ford Escort) are a mere two points behind the leaders and currently share 6th place. Judged on how well they each perform against others in their respective classes, further success will pay dividends as the season progresses.

The first of the 12O+ starters on the Plains Rally leaves Oswestry at 8.00am on Saturday 13th May and heads for special stages in Dyfnant, Aberhirnant and Llangower which offer 42 miles of competition.  Once completed, the finish back in Oswestry beckons from 3.45pm that afternoon.