The Rallynuts Stages, Round 3 of the JORDAN Road Surfacing BTRDA Rally Series, has attracted a superb entry of 137 cars that will all be converging on the Royal Welsh Agricultural Showground in Builth Wells for the event which takes place on 13th April.

Thus far the Jordan Road Surfacing BTRDA Gold Star® Championship has been dominated by Euan Thorburn/Paul Beaton whose Ford Focus WRC has claimed outright victories on both the Cambrian & Malcolm Wilson Rallies. Last time the Scotsmen had a serious tilt at the Gold Star title – they won it in 2013 – the Rallynuts Stages wasn’t part of the calendar. So, will any possible unfamiliarity of the terrain prevent them making it three-in-a-row?…   As you can imagine, in an entry of this size, there’ll be people queueing up to wish them bad luck (in the nicest possible way, of course!) on their visit to mid Wales!  With five events remaining and with just the five best scores to count towards the end-of-season tally, it’s still quite possible for anyone to still register for the JORDAN Road Surfacing BTRDA Rally Series at the Rallynuts Stages and to clean up….

Like Thorburn/Beaton, another driver who’ll be a long way from home is Irishman Connor McCloskey who has already proved that he has some empathy with the stages, winning the event on his last visit in 2017! It’s also perhaps worth mentioning that, having missed the Cambrian, Connor only managed to complete the opening stage of the Malcolm Wilson Rally in his Fiesta before he was forced to retire, but he did set FTD….

2016 Gold Star Champions Charlie Payne/Carl Williamson’s season could have started better, but that of their successors, Stephen Petch/Michael Wilkinson, hasn’t started at all yet! In BTRDA terms, their Fiesta has recorded two consecutive DNFs and really needs a good result this time to kick-start its challenge.

Sam Bilham’s introduction to a Fiesta R5 continues and, following a very respectable Top Six finish on the Malcolm Wilson, he and Patrick Walsh will be looking to progress further up the learning curve in Wales.

After their retirement on the Cambrian, Ian Joel/Graeme Wood’s 2nd overall in Cumbria in their Escort Cosworth has certainly livened up the Class B13 battle. However, with two good scores to his credit, Richard Hill’s Impreza leads the charge from Petr Krizan/Lukas Sintal’s Lancer EVO9. Finding themselves in a similar situation to Petch/Wilkinson, Matthew Hirst/Declan Dear’s 2019 scorecard currently reads: Started 2 – Finished 0. Hence, they won’t need to phone a friend – or anyone else! – in search of an answer to their situation. Early leader Ian Bainbridge (Impreza) must also put his Cumbrian DNF behind him and look to restoring his advantage as the season moves towards the halfway point.

Scott Faulkner/Gareth Parry (Lancer EVO9) hold the upper hand in the BTRDA Production Cup, but Russ Thompson/Andy Murphy and Pat Naylor/Ian Lawrence, whose own EVO9 was eventually recovered undamaged from a Lake District ditch, won’t be going away any time soon! 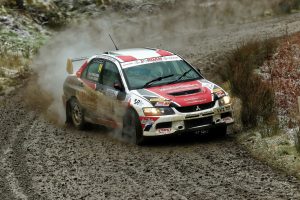 With two MRF Fiesta ST Trophy to their credit already, Zak Hughes/Tom Wood are mixing it with their turbo-charged four-wheel drive counterparts in the overall Production Cup table.  As the only Fiesta crew to maintain a 100% finishing record to date, whatever happens on the Rallynuts Stages, the pair will still be leading at the end of it. However, should something go awry, the likes of Bobby Mitchell, Steven Ormond-Smith and several others could be an awful lot nearer to them than is currently the case!

Nobody seems to have told George Lepley that an Historic specification Hillman Avenger is not the sort of car that one readily associates with leading the BTRDA Silver Star® Championship. [See main photograph] Nevertheless, following an exceptional couple of runs, (11th overall and first 2WD car on the Malcolm Wilson! ) it is to be found at the top of the points table and, at the same time, shares joint ownership of the BTRDA Historic Cup with David Gathercole’s Escort RS1600.  In addition George won the £500 prize for the highest placed Historic Car and the £150 TCS prize for the highest placed Junior driver.

Damian Pratts/Jonny Tad Evans were closest to Lepley on the Cambrian but tipping their Escort upside down in the Lake District prevented them from maintaining the pressure. So, the Rallynuts Stages presents them with a further opportunity… Zak Hughes’ efforts are paying dividends in the Silver Star category as well but, behind him, there are a trio of R2 Fiestas in the hands of Perry Gardener, James Giddings and Tommi Meadows who, after just two rounds, are too close for comfort!

In the BTRDA Rallye R2 Cup itself, Fiestas certainly rule the roost with the top seven places currently occupied by such vehicles. Gardener leads, Malcolm Wilson ‘winner’ Tony Simpson is next and then tied for third place are Giddings and Meadows but, as ever, one slip and the look of the points table could alter significantly… 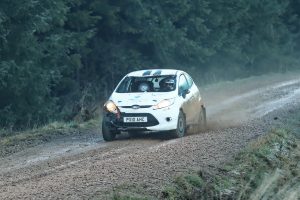 <<<<<<<  In spite of inverting their Fiesta, Ross Leach/Hannah McKillop carried on to score good R2 Cup points in Cumbria!

The Fuchs Lubricants BTRDA 1400 Championship has the makings of a gigantic tussle this year – numbers are on the up and the top six cars, led by the Talbot Sunbeam of Chris Powell / Jim Lewis, have already banked two scores. Then Callum Black/Michael Gilbey (MGZR) missed the Cambrian and came out on top in Cumbria, while Dave & Toby Brick (Corsa) were Powell’s closest rivals in North Wales but then opted out of the trip to the north west.  They’re all present in Builth Wells – so, stand (well!) back and watch the fireworks…

Mat & Dan Evans’ Peugeot 205 has proved victorious in Class 1400C on both outings to date, but, at the same time, has been unable to shake off the attentions of the Nissan Micra of Richard Garnett/Rob Gilham. Nobody’s relaxing here yet, either!…

Joseph Keen’s MG ZR took top honours in the BTRDA Rally First Championship on the Cambrian Rally but then sat out the trip to the north-west. Starting their campaign on Round 2, Sam & Liam Johnson were unable to capitalise on the leader’s absence when their Seat Arosa stopped after three of the eight stages on offer in the Lake District. So, for the first time this season, we now have the chance of a head-to-head…

The first car leaves the start of the Rallynuts Stages at 8.30am on Saturday 13th April for the first of six special stages, totalling 44 miles, and is due to return to the Showground for the finish at 4.00pm that afternoon.