As contenders for the JORDAN Road Surfacing BTRDA Rally Series prepare for their second visit of the season to the Royal Welsh Showground in Builth Wells for the Nicky Grist Stages, the pressure on the leaders – not to mention those who have designs on podium places! – in each of its various facets is beginning to mount. With just two rounds to go after this weekend, no-one is yet in a position to relax. Indeed, apart from the inaugural BTRDA Rallye R2 Cup which, thus far, has been completely monopolised by the Fiesta of George Lepley/Tom Woodburn, each category has seen at least two different winners from the four events that have already taken place.

Meanwhile, contenders for the MAXXIS MSA English Rally Championship are really only just getting into their stride. The unfortunate cancellation of the Malcolm Wilson Rally put the start of this year’s ERC back to the Carlisle Stages at the beginning of June, with the Quinton Motor Club-organised Nicky Grist Stages as the second round, and then there are still another three to complete after this weekend.

Stephen Petch/Michael Wilkinson won last year’s Nicky Grist Stages, on their way to claiming the BTRDA Gold Star® Championship crown – and the MAXXIS MSA English Rally Championship – and have made no secret of their wish to repeat the exercise in 2018.  However, their efforts have so far been somewhat upstaged by Matt Edwards/ Darren Garrod (Fiesta WRC) and current BTRDA Rally Series leaders Paul Bird/Jack Morton (Focus WRC) who have amassed two maximum scores apiece.

2016 Nicky Grist Stages winners Luke Francis/John H Roberts have changed their allegiance to a Fiesta WRC this season – with mixed results. A couple of excellent second-place points scores have been bookended by DNFs, placing them just outside the Top Ten in the Gold Star Championship points. There’s still time to make amends but any further ‘misfortunes’ will cost them dearly. 2016 Gold Star Champions Charlie Payne/Carl Williamson start behind them in their hastily-repaired Fiesta following its inversion last time out in Kielder, while Sacha Kakad/James Aldridge continue to acquaint themselves with their new R5 Fiesta. Martyn & Dawn England (Fiesta R5+) were 4th overall on last year’s Nicky Grist Stages and the Ilminster husband-and-wife team return in an attempt to improve on that excellent result.

Pat Naylor/Ian Lawrence travelled back to the Midlands from Carlisle last month with maximum BTRDA Production Cup points in the bag but, up until then, Russ Thompson/Andy Murphy had come out on top of the Lancer EVO battle and that, allied to their 100% finishing record, sees them arriving in Builth Wells as top dogs. The Impreza of Jon Ross/Martin Auskerin returns after absenting itself from the trip up north and a good result now will keep both car and crew in the mix.

Meanwhile, there’s a strong Welsh element to the MRF Fiesta ST Trophy entry! The top seeded crew is Zak Hughes (Welshpool) & Tom Wood (Cwmbran) who’ll be followed a couple of minutes later by Kalvin Green (Treorchy)/Osian Owen (Rhyl) and current leaders James Giddings (Swansea)/Sion Cunniff (Gaerwen). Mathew & Tim Tordoff are the highest placed ‘English’ crew prior to the Nicky Grist but they all need to be keeping a sharp eye out for 17-years old Ewan Tindall and co-driver Paul Hudson who, on the grounds of the driver’s age, have only been able to contest the last two events – and ‘won’ the second!…

As JORDAN Road Surfacing BTRDA Silver Star® Championship leaders following the Carlisle Stages, Rob Dennis/Andy Boswell have the honour of being the first of the main series contenders away from the Showground in their Escort Mk2. Right behind them are Owen McMackin/Lee Taylor in their larger-engined version, with Allan McDowall/Gavin Heseltine’s 2.5 litre car and the Sunbeam VXR of Andy Davison/Tom Murphy also in close attendance. 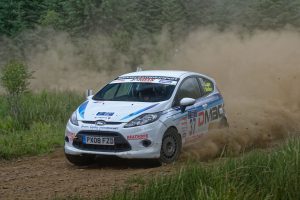 ntioned above, George Lepley’s stranglehold on the BTRDA Rallye R2 Cup is such that, unless something untoward happens on the Nicky Grist Stages, he will qualify for the free entry to Wales Rally GB through the ‘Road to Wales’ scheme. Nevertheless, the words ‘chickens’ and ‘counting’ spring to mind!… Will Graham/Steven Davey, in another Fiesta, are handily placed to benefit from any misfortune that may occur to the current R2 Cup leader and then ‘crunch time’ – when the prize-winner is revealed – is at the finish of the Woodpecker Stages at the beginning of September. Bob Vardy, Roger Nevitt and a returning Sam Bilham, (the 2017 Fiesta ST Champion) also in Fiesta R2’s, are also sure to provide George with some strong competition.

In the battle for the BTRDA Historic Cup, normal service was resumed on the Carlisle Stages following a blip on the previous month’s Plains Rally. Ernie Graham/Robin Kellard not only took their Escort to a category win but also claimed 3rd-place Silver Star points in the process! Tom Coughtrie’s Mitsubishi Galant VR4, which had also failed to finish the Plains, went some way to restoring its driver’s faith with a class win to keep it in contention for the overall lead.

So, we now move on to the contenders for the BTRDA 1400 & Rally First Championships who, along with crews in Historic Category 1 & 2 cars (+ Category 3 with single cam engines), will start at the front of the field, following the MSA’s relaxation of the rules regarding the running order on events, but in reverse order. Still with us? Splendid!….

Perhaps the people who need to be most aware of the situation are Emma Morrison, who has switched roles to take over the driving seat for this event, and Jon Quintrell who will be first away from the start of the Nicky Grist Stages in a Rally First Volkswagen Lupo GTI. The two Rally First 2.0 litre Toyota Corollas of Championship leader Matthew Baddeley and Guy Butler resume their friendly rivalry – on the Carlisle Stages, one didn’t start and the other didn’t finish!… Having also been absent last time, leaders after the opening round, Sam & Liam Johnson, will be hoping that their Seat Arosa will be in a position to give them a second maximum in mid Wales. 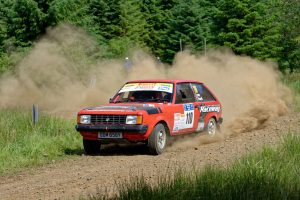 Following the opening round of the MAXXIS MSA English Rally Championship, as a class-based series, a look at the points tables reveals multiple leaders. It’s only now, as contenders have a second chance to exert their supremacy that the number of names with maximum points begins to decrease. Those dining out on their success prior to the Nicky Grist include Ernie Graham (Escort Mk2), George Lepley (Fiesta R2), Paul Bird (Focus WRC), Tommi Meadows (Ka) and Ian Joel (Escort Cosworth). It goes without saying that all these good folk are preparing for a trip to Builth Wells on 14th July!

The first car (Emma Morrison/Jon Quintrell) leaves the start of the Nicky Grist Stages at 8.31am on Saturday morning and on the menu are 45 miles of special stages in some of the classic mid-Wales forests. Cars then begin arriving at the finish from 3.30pm that afternoon.  For further information on the Nicky Grist Stages, visit: www.nickygriststages.co.uk