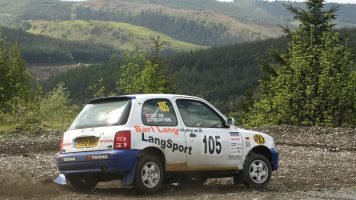 STILL ALL TO PLAY FOR !…

The Eventsigns Woodpecker Stages is the penultimate round of the 2017 RAVENOL BTRDA Rally Series and the MAXXIS MSA English Rally Championship and the organisers, Sixty & Worcestershire Motor Club, have attracted a superb entry running to more than 140 cars. In BTRDA terms, with the exception of Sam Bilham and co-driver Cameron Fair who have already made sure of this year’s Fiesta ST Trophy, the titles of all the other constituent parts of the Series are still to be won and lost. The ‘pretenders’ to the various crowns have just the Woodpecker and the North York Moors-based Trackrod Forest Stages at the end of September to stake their claims. Hence, spectators out on either – or both – of these events are in for a treat!

As far as the RAVENOL BTRDA Gold Star® Rally Championship is concerned, this year’s winners are likely to be either Callum Black/Elliott Edmondson or Stephen Petch/Michael Wilkinson. The two Fiesta crews have spent much of the season running fairly close together but, with five scores to their credit, Black/Edmondson currently lead the table from Petch/Wilkinson. The latter failed to finish the Malcolm Wilson Rally in March but, since then, have taken three outright victories on the four events they have finished. Dropped scores come into play now, but whoever is to succeed Charlie Payne/Carl Williamson, (running at number 7 in a Fiesta WRC), as Gold Star Champions still have some work to do to achieve their goal.

As far as outright winners of the Woodpecker Stages are concerned, in addition to the three crews mentioned above, although Luke Francis/John H Roberts have had a disappointing season to date by their high standards, their Mitsubishi Lancer EVO9 is a proven winner at this level and cannot be discounted. Former Gold Star Champion Hugh Hunter, with Manxman Rob Fagg pointing the way, is still getting to grips with the intricacies of his particular Fiesta and needs a good result following a DNF on the Nicky Grist Stages, while Martyn & Dawn England have improved beyond measure in the twelve months since they took delivery of theirs. 4th overall last time out – worth a punt? Possibly!….

Russ Thompson/Andy Murphy are leading the BTRDA Production Cup in their Mitsubishi Lancer EVO9 by the narrowest of margins from Sacha Kakad/James Aldridge. The only crew to score two category maximums so far, Pat Naylor/Ian Lawrence, could possibly overhaul both the aforementioned but, in order to do so, top notch results are required on the final two outings – a position in which both Richard Hill/Steffan Evans (Lancer) and Andy Davies/Max Freeman (Impreza) also find themselves.  Leaving the Ludlow Racecourse start line astern will be Davies, Naylor, Thompson, Hill & Kakad but, for all concerned, the order in which they arrive back there for the finish will be of much greater importance!  The Fiesta STs also conform to Group N (Production Cup) specification and, although the overall Trophy winners have been identified, the other podium positions still have to be sorted, with Alasdair Currie/Steven Brown currently laying claim to runners-up spot.

The RAVENOL BTRDA Silver Star® Championship caters purely for those with two-wheel drive cars and, with different winners on each of the five events to date, no-one has taken the series by the scruff of the neck!  Barry Jordan/James Gratton-Smith’s consistency – five starts, five finishes – sees their Hillman Avenger BRM atop the table but, on this occasion, Leominster’s Theo Bengry/Les Forsbrook will be the first crew away in their Escort, followed by the similar cars of Ashley Davies/Sam Fordham and Rob Dennis/Andy Boswell, neither of whom scored any points on the Nicky Grist. A good result from Steve Hopewell/Clive Jones could also elevate them into the Top Three at this important stage of the season.

Much has been written on the subject of the insistence of seeding in order of anticipated performance and the effect this has had on entry levels of the smaller capacity cars. However, that is not to decry the efforts of those who are competing in such vehicles as their commitment is no less intense! While Jersey’s Ed Fossey and his Blackpool-based co-driver Chris Sharpe-Simkiss are leading the Thomas Panels BTRDA 1400 Championship in their Toyota Yaris, Dave Brick can see the Woodpecker Stages HQ at Ludlow Racecourse from his farm! He and son Toby took their Nova to top honours on the Nicky Grist Stages and, if local knowledge counts for anything, the others better watch out!… Although not quite as close to Ludlow as the Bricks, Chris Powell/Jim Lewis (Talbot Sunbeam) aren’t that far away in Hereford and, given a clear run, can be relied upon to put on a good show. Bring it on!…

Bart Lang/Sinclair Young (Nissan Micra) have emerged victorious on the last three rounds of the BTRDA Rally First Championship, such that were they to sit the Woodpecker out, they would still be leading their respective categories at the end of the day. However, with two rounds to go, the destination of the winner’s trophy is yet to be decided! Chris Hickman/Alex Stanbury (MG ZR) & David Perkins/Jordan Joines (Micra) could still influence the final outcome, while category winner on the Malcolm Wilson Rally, Andrew Wheatley (Ford Puma) also returns to join in the fun on this occasion.

As far as contenders for the MAXXIS MSA English Rally Championship are concerned, the Woodpecker Stages represents a return to forest rallying after the option of three consecutive asphalt events. This year’s Championship has been completely revamped and, whilst it is still class based, any vehicle complying with MSA Technical Regulations is eligible to compete. After a good run on the Tyneside Stages over the Otterburn Military Ranges, Stephen Petch currently holds sway but, as every competitor is pitted against those in his/her class, it’s just as feasible that the eventual winner will come from one of the smaller capacity classes.  The latest championship points can be found at www.englishrally.co.uk/english-championship-points  In 2016 Sam Bilham, in his 2-litre two-wheel drive Fiesta ST, was victorious and there’s no saying that a similar giant-killing act will not be performed by someone this time. We’ll know by the end of September!…

For further information on the Woodpecker Stages, visit : www.woodpecker-rally.co.uk