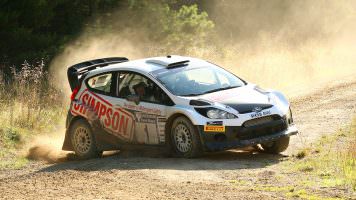 Success in Yorkshire forests brings 2016 season to a close.

CHARLIE MAKES TRACKROD HIS OWN WITH BACK-TO BACK WINS
Having already clinched the RAVENOL BTRDA Gold Star® Rally Champion Driver’s crown on the Woodpecker Stages, Charlie Payne finished the season off in fine style by taking his second consecutive victory on the Trackrod Forest Stages and, in so doing, confirming Carl Williamson as this year’s Champion Co-driver.
Stephen Petch and Michael Wilkinson opened the scoring with FTD on Staindale, but thirteen miles in Langdale later, a misfire had hampered their efforts to stay at the front and Payne had slipped past to assume the lead which he held through to the finish. So, Petch / Wilkinson were 2nd, confirming their runners-up spots in the Gold Star Championship – a very commendable performance, especially when considering their retirements from both the Malcolm Wilson and Somerset Stages which saw them languishing way outside the Top Ten mid-season.
Third Championship-registered crew home on the Trackrod were Phil and Simon Pickard in their Impreza. From a start number of 18, they slowly (well, it wouldn’t have seemed slow if you’d been spectating in the forests!) set about climbing up the leader board. However, as their appearances this season have been sporadic, they were not fighting for any end-of-season awards. Neither for that matter were Ian Joel/Graeme Wood whose recently completely rebuilt Escort Cosworth finished comfortably in the Top Ten, despite refusing to come out of 5th gear on the final stage. Bit more work to do yet, then!….
Richard Hill took his Lancer EVO9 to its second consecutive maximum in the BTRDA Production Cup, ahead of Peter Stephenson’s Focus WRC which rounded off a very competitive Top Ten. Brian Bell/Jamie Edwards (Focus WRC) recorded their fifth finish, from five starts – had that all-important sixth score been in place, the driver, who was 1987 BTRDA Clubmans and 1999 Silver Star Champion, would have finished in the Top Ten of the 2016 BTRDA Gold Star Championship….. Paul Benn/Richard Cooke, whose performances in their older model (judging by the registration plate, anyway!) Focus WRC had kept them in contention for outright Gold Star honours for much of the season, finally let them down on the Trackrod. They were 3rd in the battle for Championship points after Langdale, but then ground to a halt midway through Dalby.

BTRDA PRODUCTION CUP and FIESTA ST TROPHY – THOMPSON’S (PRODUCTION) CUP RUNNETH OVER!
As mentioned elsewhere, in BTRDA Production Cup terms, Richard Hill (Lancer EVO9) emerged victorious from the Yorkshire forests but, not having begun his campaign until July, his efforts would not directly affect the battle for the title. That honour fell to Russ Thompson & Andy Murphy who, despite brake problems which afflicted their EVO9, took 2nd place on the day to claim the BTRDA Production Cup title. Daniel Moss/Sam Allen (also EVO9) were chasing them down, eventually finishing less than 20s adrift, giving the Gloucestershire crew their best result of the season. Challenges from Andy Davies/Max Freeman (Impreza) and Sacha Kakad/James Aldridge (Lancer EVOX) both evaporated in ditches on Langdale, whilst (shock, horror!) Cameron Davies’ hitherto invincible Fiesta ST succumbed to a broken driveshaft in Cropton. Sam Bilham’s persistence paid off – having completed all eight events in this year’s Fiesta ST Trophy, he took a maximum to confirm his runner-up place in the inaugural series. However, Tom Easson’s similar car was only six seconds adrift by the finish, with Tim KirvanRodgers/Abi Haycock also completing the season with a bag of points.

RAVENOL BTRDA SILVER STAR® CHAMPIONSHIP – BURTON’S PERFORMANCE CENTRES ON RELIABILITY!
Having been 3rd in the RAVENOL BTRDA Silver Star® Championship points on five separate occasions so far this season, Phil Burton & Mal Capstick finally came away with a maximum on the Trackrod Forest Stages. Their Escort was the first two-wheel drive car home which gave them a class win and confirmed their 2nd place in the overall Silver Star Championship table. Jody Bowcott/David Millard were next, leaving their best till last, with Ashley Davies/Sam Fordham taking the final podium spot on the day. Outgoing BTRDA Historic Champion Paul Street, with Ian Jones reading the notes, took his Escort to its only maximum of the season, collecting 4th Silver Star points along the way, with Barry Jordan/James Gratton-Smith’s Hillman Avenger and the Escort Mexico of 2016 Historic Champions Robin Shuttleworth & Ron Roughead in 2nd & 3rd respectively.
Now, seasoned Silver Star Championship watchers will have realised that there are a number of names missing from the above! Let’s start with Gavin Edwards & Caron Tomlinson – they arrived in Yorkshire as championship leaders and, despite exiting the event in Dalby, managed to hang on to that coveted spot due, in no small way, to problems experienced by their rivals. Nothing less than a maximum, even after the demise of Edwards/Tomlinson, would do for Boyd Kershaw/Bryan Hull if they were to return south as champions. Ah, right – well, they’d already blotted their copybook by rolling their Escort in Staindale, so that was them out of the equation even before Edwards/ Tomlinson’s departure. Cameron Davies’ consistency in his Fiesta ST had also put him in with an outside chance of success in this particular category but, as detailed above, he wasn’t destined to see the finish for the first time this season either. Even so, he still takes 3rd place behind Edwards and Burton – pretty impressive in a Group N car!… Unfortunately, Kershaw’s dream of back-to-back Silver Star titles was not to be – his untimely, not to mention undignified, exit from the Trackrod demoted him and Hull to 4th place in the final analysis.

THOMAS PANELS BTRDA 1400 CHAMPIONSHIP – HONES KEEP HEAT ON TO TAKE TITLE!...
Ulstermen Jordan & Paul Hone overcame boiling brake fluid on the Trackrod to put their Proton Satria into a winning position, not only on the event but also in the 2016 Thomas Panels BTRDA 1400 Championship. Their third maximum of the season saw them finish ahead of Joe Evett/Phil Hall (MG ZR), with Ed Fossey’s Toyota Yaris in 3rd. Gordon Alexander’s MG ZR took a 1400C class win from the Micra of Carl Davies/Richard Jones, but both had to give best to Neil Andrew/Dom Adams (Micra) who, although absent on this occasion, finish the season as class winners and runners-up in the overall Thomas Panels series. Charlie Barlow’s hopes of improving his Championship position before the season ended were dashed when his Micra was forced out in Langdale. OK, due to the ongoing issues with seeding, we know entries aren’t what they once were in the 1400 Championship but, rest assured, with five different ‘winners’ from the eight events, competition at this level is still extremely healthy!

VITAL EQUIPMENT RALLY FIRST CHAMPIONSHIP  – WELLS WINS BATTLE ON TRACKROD!
Richard Wells/Calvin Houldsworth took their VW Polo to its third consecutive maximum score in the Vital Equipment Rally First® Championship on the Trackrod Forest Stages. By the end of the day Dominic Hodge & Stefan Arndt were just a handful of seconds behind them in their Micra, despite a 90mph sideways moment in Dalby which will probably result in a fairly hefty dry-cleaning bill! Whatever, following their own three maximums scored earlier in the season, another 2nd gave them the 2016 Rally First Championship title by a narrow margin from Wells/Houldsworth. Erstwhile leaders prior to the start of the final round, Emily & Eliot Retallick began steadily over the first couple of stages, giving best to Hodge/Arndt. However, having promised to up the pace in their Peugeot 205XS, they soon found themselves sidelined with mechanical issues. At this stage, whether the two issues were connected is really neither here nor there but, at a stroke, they dropped to 3rd in the final table. Tom Williams/ Emma Morrison were 3rd on the day in their Fiesta R1, confirming their 4th place for the season, ahead of David Perkins/Osian Owen (Micra) – both crews finishing all six events they started.
CHAMPIONSHIP POINTS
A full list of all the 2016 RAVENOL BTRDA Rally Series points and Award Winners can be found in the Competitor section of this website.  The Awards Presentation evening will be held on Saturday 7th January 2017 at Ramada Penns Hall Hotel, Sutton Coldfield, West Midlands.  Ticket Application forms can be downloaded from the Newsletter section.