The Choice of Champions!….

Preview of Round 1: Cambrian Rally.

The ‘Choice of Champions’ was once the famous by-line of a former Wolverhampton-based tyre manufacturer and, as all the contenders for the JORDAN Road Surfacing BTRDA Rally Series convene in Llandudno for the Visit Conwy Cambrian Rally, we wonder just who is going to have a ‘good year’ in 2018!…      Twelve months on from the disappointment shared by all following the abandonment of the 2017 event due to adverse weather conditions, the 2018 Cambrian’s entry list is littered with former BTRDA Champions and previous event winners, for the start of what will be the 65th running of the BTRDA Gold Star® Rally Championship.  Winners of the 64th, Stephen Petch/Michael Wilkinson (Fiesta WRC), have already made it perfectly clear that they intend to take on all-comers as they strive for back-to-back championships but, as is ever the case, there are any number of others with a different take on how the new season will pan out!

At 8.00am on Saturday 17th February Petch/Wilkinson will lead the 120 crews away from Llandudno, ahead of 2012 & 2016 Cambrian Rally winners Luke Francis/John H Roberts who have forsaken their hitherto successful Mitsubishi Lancer and joined the ranks of Fiesta owners for their latest assault on the coveted title! Both they and fellow North Walian Hugh Hunter (Fiesta WRC), who won the Cambrian Rally in 2008 on his way to Gold Star glory that same year, will be hoping for better starts to their respective BTRDA campaigns. Having entered last year’s Cambrian, neither was able to actually contest it following a road traffic accident and engine trouble respectively the previous day rendered their cars hors de combat. Quietly, they must have breathed sighs of relief when the event was curtailed!….

Breaking the Fiesta monopoly, 2003 Cambrian winner Paul Bird, who has former MSA Asphalt Rally Champion Co-driver Jack Morton to guide him round the stages, keeps faith with his trusty and very effective Focus WRC. Meanwhile Matt Edwards (Fiesta), son of Cambrian Clerk of the Course Alyn, who had such a superb British Rally Championship campaign last year, is planning a busy season which encompasses both BRC & BTRDA events. Matt is no stranger to the BTRDA Series, having won the 1400 Championship back in 2010.

Missing the first half of last year awaiting the arrival of a new car, 2016 Gold Star Champion Charlie Payne (Fiesta) is now back up to speed – literally! He won the final round of the 2017 Rally Series, the Trackrod Forest Rally, by just 0.2s from Petch and is well acquainted with just what is required to put his name on the trophy for a second time. Payne, who has Ian Windress with him on this occasion, starts in front of Hunter and Manxman Rob Fagg, while next away will be Julian Reynolds/Patrick Walsh in their Fiesta R5. Although absent from the BTRDA Series for a while, Reynolds is also a proven winner at this level….

Ian Joel/Graeme Wood are wheeling out their recently rebuilt Escort Cosworth while, maintaining the top-quality pedigree of the entry, further down the order we find 1999 Champion Brian Bell, who has Paul Spooner – most recently Champion Co-driver in 2010 – for company, in his Focus WRC. Also noted is the welcome appearance of Brian’s former co-driver (and 2003 World Rally Champion) Phil Mills, accompanying Simon de Banke who won the recent snowy event at Croft.

And so to the BTRDA Production Cup…. Having taken a sabbatical in 2016, Pat Naylor/Ian Lawrence returned last year and, immediately dispelling any doubts as to their match fitness, went on to take their Mitsubishi Lancer EVO9 to victory in what was a very competitive category – and all the signs are that life is going to be just as hectic  in 2018!  Former Cup winners Russ Thompson/Andy Murphy, who came so close to pipping Naylor/Lawrence to the post last year, start right behind the defendi 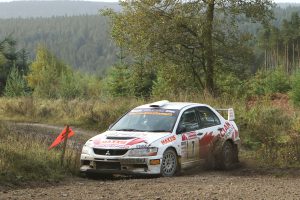 ng champions in another Lancer, while Andy Davies/Max Freeman will once again be pinning their hopes on a Subaru Impreza. 2014 Group N Champion Tom Naughton (Lancer EVO9) returns after a couple of years away from the sport and Jonathan Ross (no – not that one) also has his feet in the Subaru camp. However regular Production Cup contenders Sacha Kakad / James Aldridge have foresaken their Group N Evo10 to try the delights of a (slightly more nimble) Fiesta R5.

Also complying with the Group N Production Cup regulations are those contesting the Fiesta ST Trophy. In the absence of Sam Bilham who comprehensively claimed the 2017 title, Richard Wells/Calvin Houldsworth are the top seeded crew, followed by the similar car of Zak Hughes/Tom Wood.  Then, starting line astern are Mathew & Tim Tordoff, Kalvin Green/Osian Owen, James Giddings/Sion Cunliff and Martin Laverty/Phil Kenny, all of whom will have designs on succeeding Bilham!…

The JORDAN Road Surfacing BTRDA Silver Star® Championship caters purely for two-wheel drive cars and it’s in this particular category that series sponsor Barry Jordan has come good in recent times. Overall leader for a while last season in his Avenger BRM, he’s back to try and improve on his 3rd overall. However, great minds and all that!… The major threat on the Cambrian is likely to come from the Rowlands brothers, Ieuan and John. Ieuan has forsaken his usual Escort for the aforementioned Barry Jordan’s Avenger BRM (Barry has entered a similar 2-litre car), while John will be out in his usual Escort. BRC competitors William Creighton/Liam Regan from Ulster are next in their Peugeot 208 which is also eligible for the inaugural BTRDA Rallye R2 Cup. The Citroen DS3 of Richard Sykes/Simon Taylor and last year’s Silver Star runners-up Rob Dennis/Andy Boswell (Escort Mk2) then start just behind the Ulstermen.

This event also sees the start of the new BTRDA Rallye R2 Cup and there are at least 8 crews who have confirmed that they will be contesting this in 2018.  The BTRDA Rallye R2 Cup is open to all FIA homologated R2(B) cars and is a recognition of the increasing number of R2 cars that are now competing in UK stage rallying.

The BTRDA has been a pioneer of the 1400cc and Rally First Championships for more than a decade and, while recent circumstances have dictated that participating numbers are not what they once were, both series still harbour an extremely competitive nature. The Talbot Sunbeam of Chris Powell/Jim Lewis is already familiar with the BTRDA 1400 Championship winners’ enclosure, while Bala’s Hefin Lloyd-Davies (Vauxhall Corsa) will be hoping to hold sway on the day! Teenager Tommi Meadows (Ford Ka) and co-driver Ian Oakey (1997 Gold Star Champion)  had an up-and-down season – in more ways than one! – in 2017 but, in what was the driver’s first season of competition at this level, he acquitted himself admirably and will now be able to put his new-found familiarity with the events to good use.

The BTRDA Rally First Championship, which was won by Bart Lang’s Nissan Micra last year, allows only limited modifications to competing cars. Hoping to emulate his success in 2018, Richard Ingleby/Alex Booth’s vehicle of choice is an MG ZR, while Sam & Liam Johnson are in a Seat Arosa and Owen McConochie/Rhodri Williams will be more than happy if the Micra’s dominance is perpetuated!

Seven special stages, totaling around 45 miles, in some of the classic forests of North Wales await competitors on the Cambrian Rally and, following their completion, the first car is due back at the finish in Llandudno at 3.30pm on Saturday afternoon.