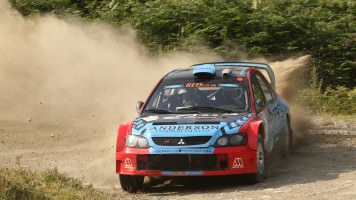 The calendar for the 2016 season has already been confirmed and is based around eight of the best one-day value for money forest stage rallies, with the best 6 scores to count.

The opening round next year will be the Cambrian Rally and event organisers have confirmed that the date change has allowed them greater flexibility with the choice of stages in North Wales which was the reason for moving away from Wales Rally GB.

Regulations for the 2016 RAVENOL BTRDA Rally Series will be published in the week leading up to Christmas when the registration for 2016 will also open. As you would expect the 2016 BTRDA Rally Series will continue to be based on the successful format of four championships; Gold Star, Silver Star, 1400’s and Rally First plus the BTRDA Historic Cup, Production Cup and MG ZR Challenge.

One addition for 2016 will be the SVP 205 Cup which will initially be based on the iconic Gp A Peugeot 205 1.6 GTi. This idea has been developed by Dominic Delaney of Specialist Vehicle Preparations (SVP) and we hope that the SVP 205 Cup competitors and cars will be a great addition to the BTRDA Rally Series. For more information about the SVP 205 Cup please go to their website at www.svp205cup.co.uk

We are anticipating the announcement of another exciting one make challenge next week that will also be an integral part of the BTRDA Rally Series in 2016.

A new BTRDA Rally website is being developed which will provide easier access on mobile phones and tablets.

2015 Award Presentation Before we get into gear for the Cambrian we still need to finish off the 2015 season in style with the Awards Presentation and Party on Saturday 9th January at the Ramada Penns Hall Hotel, Sutton Coldfield. The full list of award winners has been circulated and can be found in the Newsletters section along with the ticket booking forms. Competitors and especially award winners are encouraged to send in their ticket applications A.S.A.P. so we can sort out the table allocations and layout.

Photo is Boyd Kershaw / Bryan Hull on the Cambrian Rally courtesy of ralliphotoswales.