Preview of Round 8 (Final):

It was Callum Black who took victory on the final round of last year’s BTRDA Rally Series and, while not in contention for 2022 honours, the Brackley driver will be aiming for a repeat performance in his appropriately black-liveried Fiesta Rally2 !  So, while we already know who the Gold Star Champions are, the remaining podium places are still to be decided. Without going into the mathematical gymnastics of ‘who needs to do what’ in order to qualify, Stephen Petch / Michael Wilkinson (Fiesta Rally2), Perry Gardener / Jack Bowen and newly-crowned Welsh National Rally Champions Matthew Hirst / Declan Dear (both Fiesta R5s) are all in the frame and, while also battling for Class B13 supremacy, the Lancer EVO9s of Richard Hill / Pat Cooper and Russ Thompson / Steve Link could also feature by the time crews arrive back in Llandudno at the conclusion of the Cambrian!…

Class B13, itself, is an interesting one! Hill has finished all seven events to date and heads the table from Thompson who, for his part, has a score in hand and, given a clear run, is ideally placed to snatch victory at the last gasp. Then, although not quite close enough to target a class win, and with all the usual caveats, current 3rd & 4th placed Rob Wilson / Richard Crozier and Pat Naylor / Ian Lawrence (also Lancer EVO9s) could well end the season in the Top Three. Fascinating stuff!… 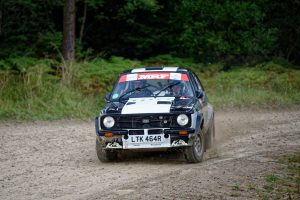 With all due deference to Andy Davison whose Talbot Sunbeam VXR showed the other two-wheel drive cars a clean pair of heels on the recent Trackrod Forest Rally, the MRF Tyres BTRDA Silver Star® Championship has been dominated by Ford Escort Mk2’s once again this season. Maximum points on each of the other six rounds have been claimed by such vehicles and, as we approach the finale, Rob Wright – whose co-driver Mark Fisher is already confirmed as Silver Star Champion – is in front of mid-season leader Nick Dobson. At the time of writing neither name appears on the Cambrian Rally entry list and thus, should this situation be maintained, Wright will automatically join Fisher as 2022 Champion.

Already confirmed as BTRDA Rallye R2 Cup Champions, Jonathan Jones / Jez Rogers have broken the Escort stranglehold at the business end of the Silver Star table in their Fiesta and 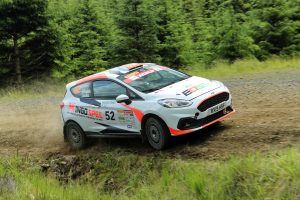 arrive in Llandudno in 3rd place. However, they must be very wary of Michael McDaid / Declan Casey whose Escort Mk2 – what else?… – has only contested four events, but has two maximums, one 2nd and a 3rd to its credit – a continuation of this form could see Jones deprived of a possible podium finish… Although only contesting selected events, the ‘Flying Kiwi’ Boyd Kershaw (Escort) and co-driver Keegan Rees, who ‘won’ Silver Star on their last appearance on the Woodpecker Stages Rally, return for the finale and can reasonably expect to be there or thereabouts when it comes to the two-wheel drive leader board.

In spite of a couple of hiccups (or ‘retirements’ as they’re known in the trade!) along the way, Grant Inglis / Gavin Chisholm (Escort) have been the season-long leaders of the Jordan Road Surfacing BTRDA Historic Cup but, as they approach the final countdown, once again it’s McDaid and Casey who could yet upset the apple-cart. Put simply, if Inglis / Chisholm finish, they’ll be safe but, as we all know, that’s easier said than done! 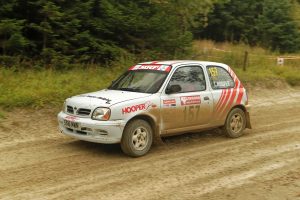 Lewis Hooper has led the Fuchs Lubricants BTRDA Bronze Star Championship right from the word ‘go’ in his ‘Rally First’-specification Nissan Micra. In spite of its lack of power when set against the 1400S ‘pocket-rockets’, reliability has helped maintain its position which only now is coming under threat as proceedings draw to a close.

Pete Gorst / Mark Twiname (Nova) have three maximums (four in the co-driver’s case) to their name but have also recorded two DNFs – so, on the one hand, they have a score-in hand over their rivals but, on the other, leave themselves with absolutely no margin for error. Not only must they finish the Cambrian to give themselves any chance of success but, if they finish well, they could earn themselves a BTRDA Bronze Star each!…  Ed James / Charlie Mason (Nissan Micra Kit Car), who posted their first retirement of the season last time out, can only improve on past scores but, dependant on the fortunes of others, could possibly hold on to their current 2nd (Driver) and 1st (Co-driver) positions. In spite of two consecutive retirements, Richard Garnett / Stefan Arndt (Nissan Micra) hold sway in Class 1400C but they’ll need to keep a wary eye out for the Ka of Adrian & Matt Walk which, while also the victim of a couple of DNFs, could still overhaul them – just!

SPECTATORS : The first car leaves the start on Llandudno Promenade at 08.01 on 29th October and further details are available at : https://cambrianrally.co.uk/spectators
All photos © Kevin Money / Malcolm Almond