Preview of Round 2 : Malcolm Wilson Rally – 9th March
This time last year the country was in the grip of the ‘Beast from the East’ and, in spite of their best efforts, the organisers of the Malcolm Wilson Rally, the second round of the JORDAN Road Surfacing BTRDA Rally Series, were forced to concede defeat at the hands of the elements. Such are the vagaries of the British climate that we have recently experienced the ‘warmest February day since records began’ – followed immediately by snow in the Lake District, so in terms of long-term planning, there’s just no way of predicting what might happen. Unbowed, the event organising team is waiting to welcome almost 100 competitors to M-Sport’s premises in Dovenby on 8th March for the pre-event formalities, prior to a cracking day in the Lake District forests.
In terms of the JORDAN Road Surfacing BTRDA Gold Star® Championship, Euan Thorburn/Paul Beaton’s victory on the season-opening Cambrian Rally in their Focus WRC sees them start the Malcolm Wilson Rally as leaders. They’ve already won it twice before but, then again, their closest rivals on the Cambrian, Charlie Payne/Carl Williamson (Fiesta), have also tasted champagne in Cumbria – so, whatever happens on the day, no-one can expect an easy ride!
Steve Simpson will be looking to improve on his 7th place on the Cambrian while, following retirements first time out, fellow Fiesta crews Stephen Petch/Michael Wilkinson, Sam Bilham, who has Patrick Walsh alongside for company on this occasion, and Brian Bell/Paul Spooner will be looking for an opportunity to open their respective accounts.
In the B13 class battle, Ian Bainbridge/Daniel May’s Impreza came out on top in North Wales, ahead of the similar car of Richard Hill and the Mitsubishis of Richard Sykes and Petr Krizan/Lukas Sintal, each of whom will be heading to Cumbria for the next instalment. Also appearing on the list of retirements on Round 1, both Ian Joel/Graeme Wood (Escort Cosworth) and Matthew Hirst/Declan Dear (Lancer EVO9) will be reporting for duty as they attempt to re-establish themselves in the upper echelons of the points table!

Pat Naylor/Ian Lawrence lead the BTRDA Production Cup at this early stage, having finished an excellent 4th overall on the Cambrian in their Lancer EVO9. Defending champions Russ Thompson/Andy Murphy and Scott Faulkner/Gareth Parry also registered Top Ten finishes in their examples and, as the saying goes, this one will ‘run and run’….
Welshmen Zak Hughes/Tom Wood are current kings of the MRF Fiesta ST Trophy castle as they head north but, as the Malcolm Wilson Rally is the closest event in the BTRDA Series to current runners-up, Bobby Mitchell (Dunbar)/Shannon Turnbull (Motherwell), they may be hoping for some degree of ‘home’ advantage!… Donegal’s David Kelly continues the multi-national flavour to this year’s line-up, while Matt Baddeley/Phil Kenny will be amongst those representing England!

Beginning 2019 where they left off at the end of last season, albeit in a vastly different car, George Lepley/Arwel Jenkins showed the JORDAN Road Surfacing BTRDA Silver Star® Championship hopefuls a clean pair of heels in Barry Jordan’s Historic spec. Hillman Avenger on the Cambrian Rally. However, they’ll be aware that the presence of the more powerful Escorts of Damian Pratts/Johnny Tad Evans and Owen McMackin/Lee Taylor cannot be ignored, while the threat posed by Andy Davison/Tom Murphy’s Talbot Sunbeam VXR – a DNF in Wales – must also be taken seriously. 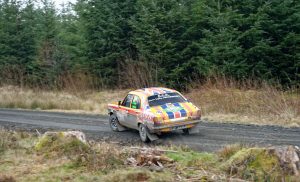 <<<<<<<<   George Lepley / Arwel Jenkins pressing on during the Cambrian Rally

As the BTRDA Rallye R2 Cup enters its second year, its popularity and relevance to the current UK rallying scene is there for all to see. Perry Gardener (son of former Gold Star Champion Shaun Gardener) and Keaton Williams (Fiesta) stamped their authority on the proceedings in Wales and may take small comfort from the absence of runners-up Ed Fossey/Will Rutherford this time. Notwithstanding, all the other ‘starters’ in the category are back for more, with the Fiestas of Tommi Meadows/Emma Morrison and James Giddings/Sion Cunniff leading the charge.

Whilst we’re not yet back to the halcyon days of entry levels in the Fuchs Lubricants BTRDA 1400 Championship, there has certainly been something of an upturn from the start of the new season, and the pace at the front is as hot as ever! Chris Powell/Jim Lewis wrung every ounce of power out of their Sunbeam on the Cambrian to beat Dave & Toby Brick’s Corsa by just 7s. However, there’s no sign of the Bricks on the Malcolm Wilson entry list, but Steve Black/Paul Morris will be taking their Suzuki Swift for a trip up the M6, while Pete Gorst/Phil King (Nova) won’t have far to go from their homes in Kendal ! 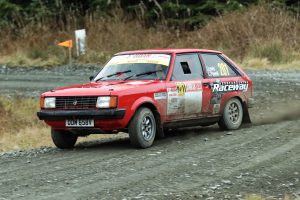 Class 1400C leaders Mat & Dan Evans (Peugeot 205) will be looking to extend their advantage after the opening round but, rest assured, Richard Garnett/Rob Gilham (Micra) will have other ideas on that score!… Meanwhile, Sam Johnson’s Seat Arosa and the Fiesta ST of Wesley Gilford will be going head-to-head in the BTRDA Rally First Championship.

The MAXXIS Motorsport UK 2019 English Rally Championship also takes a bow in Cumbria as its new season gets underway. A mixed-surface seven-event calendar (5 forest and 2 asphalt) beckons for competitors in this class-based series that caters for all vehicles that comply with the current Motorsport UK Technical Regulations. There are seven separate capacity classes and, the points will reflect achievement against other competitors in the same class, and as such, the eventual champions could come from any one of them – indeed, the Ford Escort Cosworth of 2018 English Rally Champions Ian Joel / Graeme Wood were not from the most powerful class. 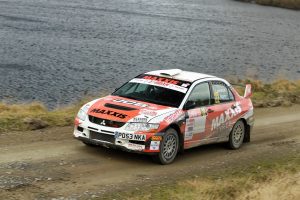 Following the opening round – the Malcolm Wilson Rally – there could be several joint leaders, i.e. the winners from each class, and it’s only as the season gets into full swing that success will pay dividends. There’s plenty of time for everyone to sort themselves out – the final event, the Wyedean Stages, isn’t until mid-November!…

The first car leaves the start of the Malcolm Wilson Rally from M-Sport at 7.00am on Saturday 9th March for the first of eight special stages in the Lake District, before the finish at the Hired Lad, on the outskirts of Penrith, at 15.00.      AH