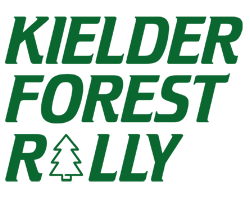 WHOSE ROUND IS IT?

Preview of Round 4: Kielder Forest Rally (18th June)
The first three rounds of the MRF Tyres BTRDA Rally Series have each produced different winners and, as crews converge on Hexham for the Kielder Forest Rally, the burning question is ‘are we going to see a repeat performance from a particular crew – or will yet another pair of names be added to the 2022 BTRDA Gold Star ‘Roll of Honour’?… 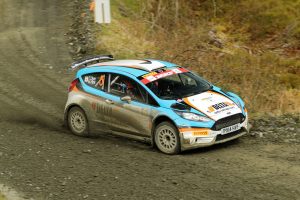 Rallynuts Stages winner Matthew Hirst will not be among those vying for top spot on this occasion as the Kielder Forest Rally clashes with the wedding of his co-driver, Declan Dear! So, while those immortal words ‘I do’ will be heard in a certain part of Surrey, the Auction Mart in Hexham is more likely to echo to the sound of ‘I could’ from Hirst/Dear’s rivals as they seek to capitalise on their absence!

Elliot Payne and Patrick Walsh (Fiesta Rally2) shown in the featured image, were victorious last time out on the Border Counties Rally and Stephen Petch / Michael Wilkinson (Fiesta) also have a victory under their belts this season – their Fiesta triumphed on the Malcolm Wilson Rally. However, as crews arrive in the north-east, Perry Gardener / Jack Bowen (Fiesta R5) hold the Gold Star bragging rights – just! Three third-place finishes see them two points ahead of the absent Hirst/Dear and Russ Thompson / Steve Link whose Lancer EVO9 rules the roost in Class B13, also by the narrowest of margins!

Tom Llewellin / Ross Whittock, who were leading the Border Counties Rally prior to their ‘off’ on their first outing in an R5 Fiesta, are back for more, while Ian Bainbridge / Will Atkins (Skoda Fabia) have also previously lead a BTRDA Series round – it can only be a matter of time before each crew attains the top step of an event podium. 2016 Gold Star Champions Charlie Payne / Carl Williamson (Fiesta Rally2) have already ‘been there, done that’ and cannot be discounted from further success, even if Payne Junior is currently attracting most of the attention in that particular household!
With the BTRDA Rally Series scoring set at six (best) from eight (events), everyone is allowed a degree of leeway in terms of choice – or, as is more often the case, a couple of non-finishes! – without afflicting lasting damage to their campaigns. In Class B13, while Thompson / Link are marginally ahead of Richard Hill / Pat Cooper (also Lancer EVO9), the normally reliable Escort Cosworth of former Motorsport UK English Rally Champions Ian Joel / Graeme Wood has recorded two consecutive DNFs such that, with less than half the season done, it already finds itself in the last-chance saloon and cannot afford any further errors – no matter at whose door the fault is deemed to lie!.. 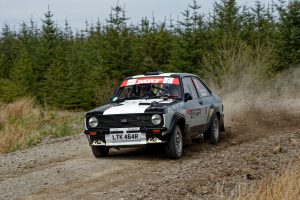 With all due respect to Rob Wright and Mark Fisher, whose Escort Mk2 leads the MRF Tyres BTRDA Silver Star® Championship following the Border Counties Rally, no-one has yet grasped the series by the scruff of the neck and, as with Gold Star, we’ve seen different winners on each event so far, even if Escorts do appear to be the vehicle of choice!…

Nick Dobson’s Escort occupies runner-up spot while, hoping for a good season following the disaster that was 2021, Andy Davison / Tom Murphy are experiencing persistent trials and tribulations with their Talbot Sunbeam VXR, leaving them just outside the Top Ten at this stage. It’s also good to welcome the return of 2011 Silver Star Champion Allan McDowall whose past mastery of his 2.5 litre Escort was such that the words ‘cat’ and ‘pigeons’ spring to mind!….

Fortunately for them, Grant Inglis / Gavin Chisholm’s attraction to the scenery – and subsequent retirement – on the Border Counties Rally hasn’t affected their Escort’s position at the head of the Jordan Road Surfacing BTRDA Historic Cup. However, the presence in Kielder of Ernie & Patricia Lee (BMW 325i) and Kris Hopkins (Triumph TR7 V8) – both class winners last time out – will possibly preclude a recurrence of such a liberty! Rejoining the fray following their absence from Jedburgh, James Lepley / Arwel Jenkins will also be looking for an opportunity to get up close and personal with the category leaders in their own Escort. 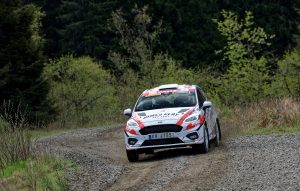 Maintaining the theme of different winners on each event, Tony Simpson / Ian Bevan took their turn in the BTRDA Rallye R2 Cup on the Border Counties, ahead of Jonathan Jones / Jez Rogers. Yaniv Bar / Osian Owen’s 3rd place on the day was sufficient to keep them at the top of the table, while all three Fiesta-mounted crews will be joined by a returning Scott & David Sloan (Peugeot 208) and BTRDA Rallye R2 Junior Cup leaders Billy Grew / Simon Rogers (Fiesta).

Hopefully, by now, Pete Gorst / Mark Twiname will have got their breath back, having had to push their Nova over the finish line in Jedburgh in order to claim maximum Fuchs Lubricants 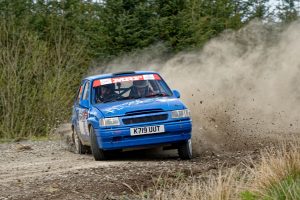 BTRDA Bronze Star Championship points for the second consecutive time!  The car’s fuel pump had failed on the run in to the final control, causing some ‘heartstopping’ moments as the crew was forced to resort to any means possible to cover the final few yards – all caught on camera by Special Stage, even though the interview with Paul Woodford had to wait until Pete was able to speak once more!…

The Gorst / Twiname Nova at full stretch – with the aid of a functioning fuel pump!…  >>>>>

Avoiding any such excitement, Lewis Hooper’s Rally First Nissan Micra continues to sweep all before it, both in terms of the overall Fuchs Lubricants Championship and, unsurprisingly, the MRF Tyres BTRDA Rally First Cup. Edward James / Charlie Mason (Micra Kit Car) and Richard Garnett / Stefan Arndt (Micra) are keeping in touch with Lewis in front while, at the same time, watching in their rear-view mirrors for Gorst / Twiname who are currently on a charge!

Having been ‘resting’ since mid-March, contenders for the Motorsport UK English Rally Championship, in association with Seacon UK, return to active duty on the Kielder Forest Rally. Joint leaders preparing to slug it out in an attempt to establish dominance in this ‘class based’ championship include Stephen Petch (Fiesta), Richard Hill (Lancer EVO9), Nick Dobson (Escort) and Yaniv Bar (Fiesta R2). However, as they set off on their merry way, their enthusiasm may well be tempered by the knowledge that just two points behind are a further half-dozen drivers who still have, potentially, five more opportunities to unseat them!…

SPECTATORS: The first car leaves Chipchase Castle at 9.00am on the Saturday morning and full details on locations/pricing can be found at: https://kielderforestrally.co.uk/spectators-timetable/
All photos © Kevin Money & Malcolm Almond.