With Covid restrictions still rife across the country, the organisers of the Eventsigns Woodpecker Stages, the third round of the MRF Tyres BTRDA Rally Series and second of the Motorsport UK 2021 English Rally Championship in association with Seacon UK, have been forced to make some major changes to its tried-and-tested format in order that the event can take place at all. Not least of these is that Sixty & Worcs. M.C. has had to move away from its traditional Ludlow Racecourse base for the first time since 1997!….

Notwithstanding, the enduring popularity of the ‘Woody’ has been responsible for a high-quality entry and those with designs on MRF Tyres BTRDA Gold Star® Rally Championship points will need to be on their mettle if they are to take the opportunity to progress. Having retired their Fiesta last time out, Callum Black/Jack Morton have some catching up to do while maximum scorers in Scotland, Garry Pearson/Niall Burns (Fabia), are the nearest challengers to current leaders Elliot Payne/Cameron Fair (Fiesta). 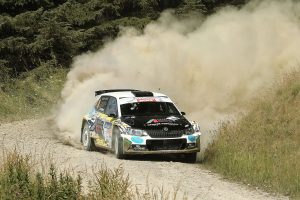 Behind Payne/Fair, Ian Bainbridge/Will Atkins (Fabia) & Tom Llewellin (Mitsubishi Mirage) also have 100% finishing records, thereby maintaining pressure on the leaders such that another good showing, combined with the ever-present possibility of something untoward upsetting the rhythm of those in front, could considerably alter the order at the sharp end of the points table by the end of the day!…
George Lepley/Tom Woodburn (Lancer EVOX) have seized the early initiative in Class B13 with two ‘wins’ to their credit, but every day’s a school day and, with a string of well-driven EVO9s in the hands of Richard Hill, Russ Thompson and Matthew Hirst, not to mention Ian Baumgart’s Impreza and the always-immaculate Escort Cosworth of Ian Joel hunting them down, it’s far too early in the season to regard anything as secure….

Paul Street and Ian Jones (Escort Mk2) are the current Two-Wheel Drive Kings as they lead both the MRF Tyres BTRDA Silver Star® Championship & Jordan Road Surfacing BTRDA Historic Cup tables. (See main image)  Although not BTRDA-registered, this time they’ll be pitting their skills against two former Woodpecker winners – Richard Gough, who was victorious on five occasions (the most recent a quarter of a century ago in 1996!), is wheeling out his ex Rothmans Escort, now suitably restored to its original 1981 livery, while 2012 victor Roger Chilman has also forsaken his Impreza for an Escort for this latest appearance.  Baz Jordan/Arwel Jenkins (Avenger) are Street/Jones’ nearest challengers in both Silver Star and Historic Cup terms but there are any number of other crews ideally placed to step up to the plate, given half a chance! 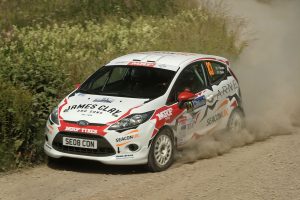 The BTRDA Rallye R2 Cup sees Jonathan Jones (Fiesta) in the ascendancy after early leaders Ioan Lloyd/Sion Williams inflicted enough damage to their Peugeot 208 on the Scottish Rally to preclude a finish. Having missed the opening encounter, Tony Simpson/ Ian Bevan (Fiesta) announced their arrival in fine style north of the border and will now be hoping for similar on the Woodpecker.

In BTRDA Rallye R2 Junior Cup terms, Lloyd/Williams retain their lead but, having both declined the opportunity of a trip to Lockerbie, Connor Tolson/Dylan Thomas and Robert Wilson/ Martin Haggett (Fiestas) are now set to rejoin the fray once more.

Meanwhile, Steve Black/Paul Morris’ desire to consolidate their lead in the Fuchs Lubricants BTRDA 1400® Championship in Scotland came to nought when their Suzuki Swift left the road in Twiglees. Richard Jordan/ 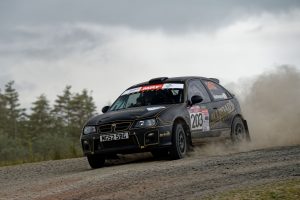 James Gratton-Smith (MG ZR) moved to the top of the table with their second consecutive finish but we can now expect fireworks as the two crews are not only joined by Dave & Toby Brick’s rapid Nova (at least it is when those two are in it!) on what is their ‘home’ event, but also Aaron Rix/Abi Haycock’s Escort. Brace yourselves!…

The MRF Tyres BTRDA Rally First® Championship is set for a ‘Clash of the Titans’ as the winner of the first round Tom Naylor (Fiesta), who was absent from the second, meets the victors on Round 2, Simon Double/Jessica Mitchell (MG ZR), who didn’t contest the season-opener….

Having had a couple of months off since their opening round, contenders for the Motorsport UK 2021 English Rally Championship in association with Seacon UK now face the prospect of two events in three weeks. So, very shortly, the six joint leaders – as is always the case after the opening round of a class-based series – will start to reduce! Indeed, two of them haven’t entered the Woodpecker, leaving defending champion.

Steve Black (Suzuki Swift), George Lepley (Lancer EVOX), Elliot Payne (Fiesta) and Ioan Lloyd (Peugeot 208) to fend off their respective aggressors as they attempt to maintain their advantage. However, they won’t need reminding that there are another six drivers, all of whom will be present, a mere two points behind them – for now!…
Due to the event being designated ‘Non-Spectator’, the action will be broadcast LIVE throughout the day across the Woodpecker Stages social media feeds. Event news and results will also be updated across its social platforms to enable you to keep up to date with all the happenings from home.